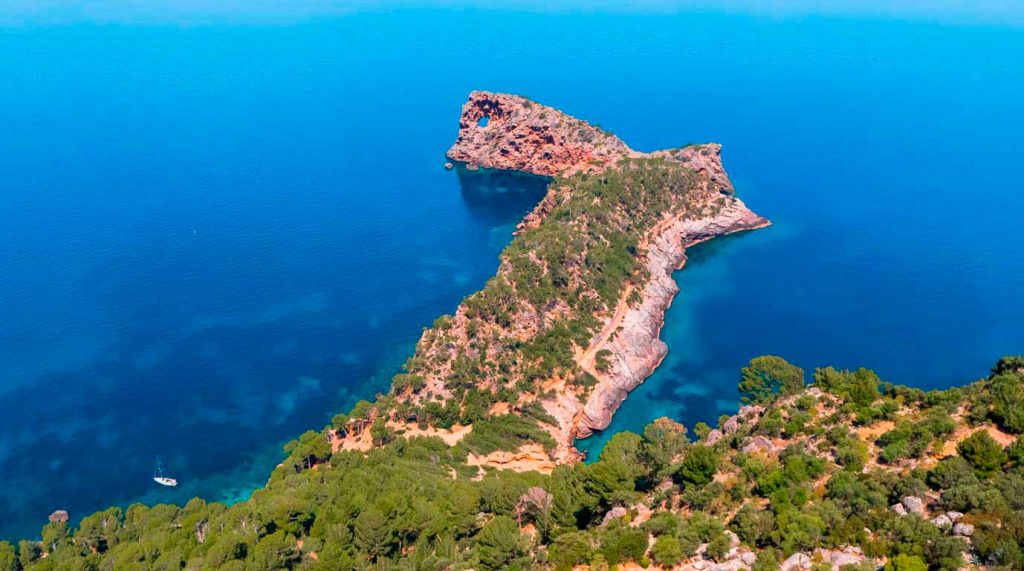 The weather in Sa Foradada

Sa Foradada, or Na Foradada, (in english, Holey) is an iconic geographical accident on the north coast of Mallorca, in the municipality of Deià. It is a small L-shaped peninsula that juts more than 600 m into the sea and at the end of which stands a rock with a large hole 18 m in diameter visible from a great distance.

According to legend, the hole in the rock was produced by a cannon shot in 1582, during a battle between Barbary corsairs and Christian ships

The reality is more prosaic, and the hole is the result of marine erosion and chemical dilution of part of the rock.

The land belongs to the Son Marroig estate, which was owned by the Archduke Luis Salvador, who ordered the construction of the path that leads to the rock.

It’s about a 40-minute walk from the roadside car park, so it’s not a good place to visit with small children, let alone people with mobility issues. There is a part of the trail with a very steep slope.

The area is of great beauty, and combines land covered by centuries-old pines and olive trees with bare rocks whipped by the Tramuntana

The waters are clean and exceptionally clear. Be careful with the winds and currents.

It is a common anchorage point, which is sometimes problematic because the boats get too close to the bathing area. 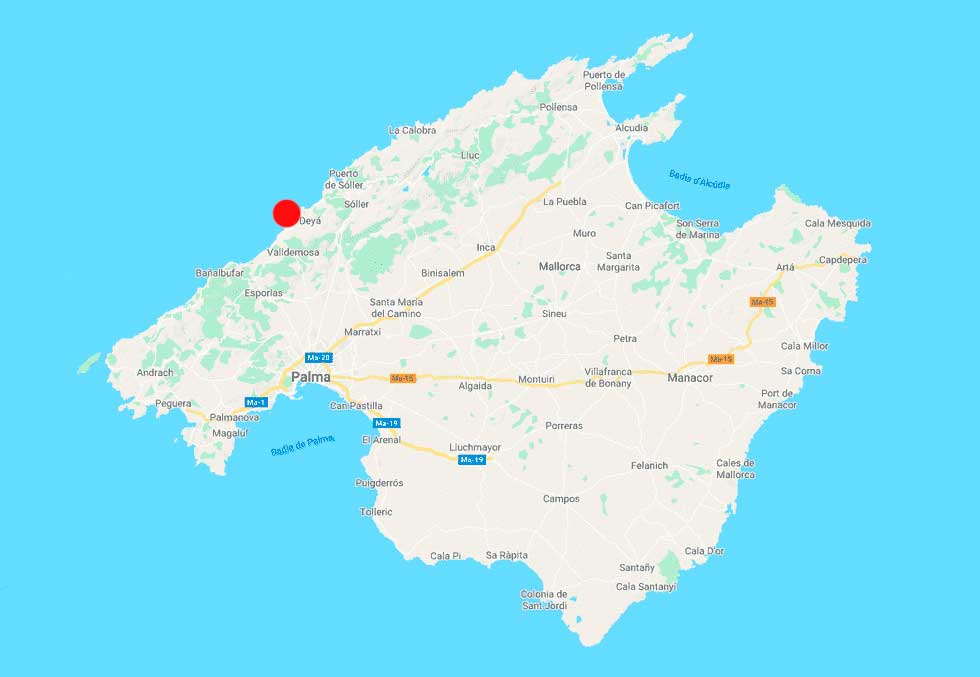 How to get to Sa Foradada

Sa Foradada peninsula is easily accessible from the road between Valldemossa and Deià.

How to get to Sa Foradada by car

We will leave Valldemossa by the Ma-1130 and after just 500 m we will arrive at a detour that points us towards Deià. After 5.5 km we will arrive at the Son Marroig estate, which is to the left of the road. In this farm there is a small parking lot next to the viewpoint.

From there a winding forest road starts that will take us without loss to Sa Foradada. Although it is not very long (less than 2 km) it takes time to go through it, the normal is about 40 minutes. It is important to carry a good supply of water, since part of the path runs through pine forests but another part does not have any shade.

The road that runs through the Sierra de Tramuntana is frequented by many cyclists, and in principle it is a good idea to cycle to Son Marroig. However, the path to Sa Foradada is not very suitable for cycling as it has sections with very steep slopes.

How to get to Sa Foradada by public transport

Public transport is a good option to get to Sa Foradada without fearing parking problems.

Next to the access to Son Marroig there is an intercity bus stop for line 203, which goes from Palma to Puerto de Sóller. From there the path is perfectly signposted.

How to get to Sa Foradada by boat

Sa Foradada is a magnificent destination to access by boat. From the sea you have a special perspective of the famous rock, and you can also dive into the waters of its cove. This is why it becomes somewhat congested with boats in the central months of summer.

We can choose to anchor on either side of the peninsula, depending on the winds that are blowing at that time

The best place is usually the south side, more protected, especially from north and east winds. The bottom is between 5 and 10 m deep, being of algae and rock. Archduke Luis Salvador anchored his well-known yacht, the Nixe sailboat, in this area.

On the north side we will be protected from the south and east winds. The bottom, made of sand and rock, is between 7 and 10 m deep, but you have to pay attention to the protruding rocks. It is advisable to anchor in this part only during the day and with calm seas.

The closest port facility is the Port of Sóller, 4.3 miles away.

Sa Foradada is a practically virgin place, except for the path opened already in the time of the Archduke to facilitate the itinerary to the rock, and there is no service for visitors.

However, on top of the cliff in front of Sa Foradada itself, a few dozen meters from the cove, there is a restaurant where we can taste good typical dishes with unbeatable views. 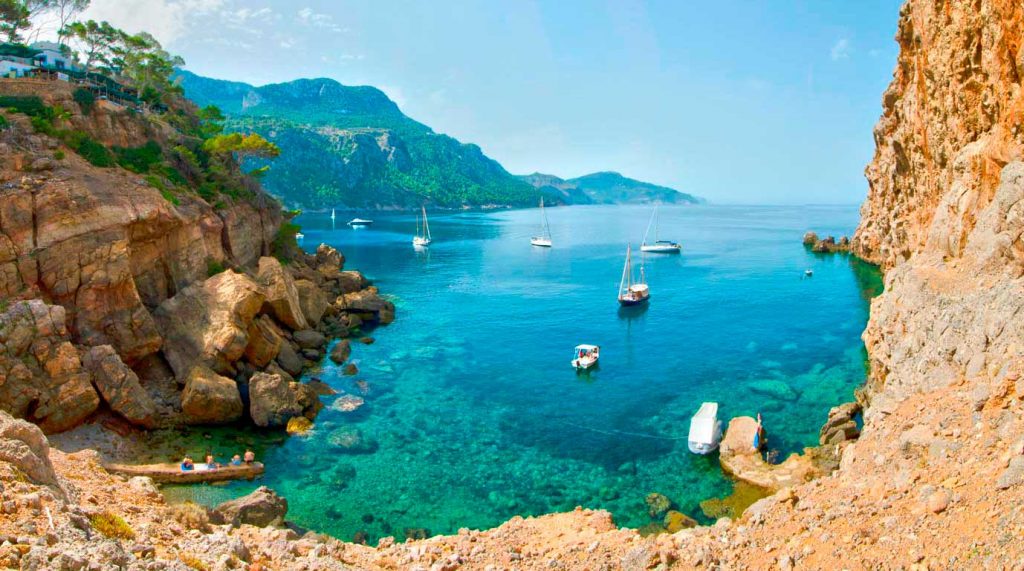 The main reason to visit Sa Foradada is to contemplate the magnificent views of this corner of the north coast of Mallorca. The Archduke himself acquired the Son Marroig estate to enjoy them, and ordered the construction of several viewpoints along the path that descends to the sea.

Due to their great clarity they are also perfect for snorkeling, being able to contemplate the underwater panorama of the mountainside sinking into the sea.

If we are fans of diving, it is also a good place to dive

In fact, it is one of the most beautiful and spectacular dives in this part of the coast of Mallorca. Of course, it is better to access by boat because lowering the equipment on foot from the parking lot would be very heavy and difficult. Diving trips are organized from the Port of Sóller that include this point.

To regain strength we have the restaurant next to the cove, and also the one at the Son Marroig viewpoint, next to the road. But it is advisable to have a reservation in both. Otherwise, we will have to take with us everything we need to eat and drink.

The closest hotels to Sa Foradada are Sa Pedrissa, less than 1 km from Son Marroig, and Villa Miramar, just over 1 km away. In Deià there is a good offer of accommodation, and there are also rustic properties for rent nearby. The next closest option is Valldemossa.