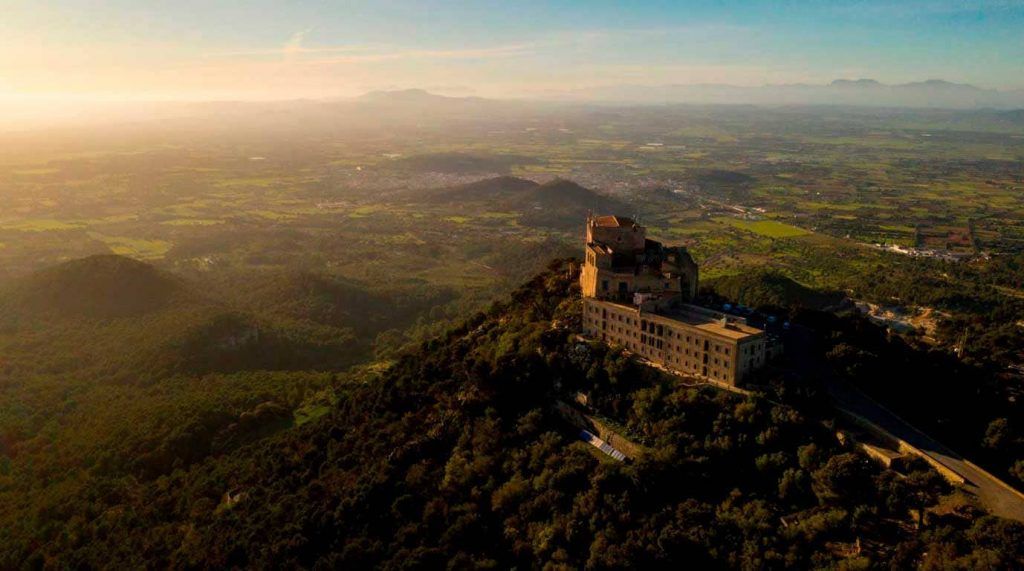 Sanctuary of Sant Salvador; a spiritual retreat with spectacular views

The Puig de Sant Salvador, with a height of 509 m, is the highest elevation in this part of the island

From its summit the entire coast of Felanitx can be seen and almost the entire Pla de Mallorca can be seen. On clear days you can see the Cabrera archipelago to the south.

At the top is the current church, built in the 18th century, probably on the original chapel of 1348, along with the inn

A stone sculpture of the Virgin from the 15th century is also kept here. This figure, an object of great devotion, was allegedly found by a shepherd. In the place where, according to tradition, this image was discovered, a chapel was built at the beginning of the 20th century.

A 7 m high copper statue of Jesus Christ as a sign of blessing placed on a 37 m pedestal.

At a secondary peak north of the main one, 477 m high and called the Picot, there is a 14 m high artificial stone cross.

How to get to sanctuary of Sant Salvador

To get to Felanitx from Palma, we will take the Ma-19 motorway towards Campos / Santanyí / Felanitx. Upon reaching Campos we will follow the directions for Felanitx, following the Ma-5120. We will cross Felanitx following the signs in the direction of Portocolom. We will leave Felanitx on the Ma-4010, and less than a kilometer away we will find the detour to start the ascent to the sanctuary of Sant Salvador.

The climb is not long, just over 5 km, but the road is narrow and winding

We must exercise extreme caution in the presence of other vehicles, but especially cyclists. The climb to Sant Salvador is a common destination point for cycling routes, and in fact it is a very good way to access the sanctuary.

If we want to opt for public transport we must bear in mind that the bus does not go to the sanctuary, only to Felanitx

On the one hand, it serves as a spiritual retreat, since its location on a mountain away from any tourist agglomeration guarantees tranquility, at least outside visiting hours.

On the purely tourist side, the views that we can see from here are simply spectacular

In addition to the coast of Felanitx, we can see a large part of the Pla de Mallorca, and on clear days the Cabrera archipelago can be seen to the south, and to the north, the bay of Alcudia.

For hikers, an essential excursion is to visit the nearby castle of Santueri. This castle, probably of very old origin but well documented from 1241, is a civic-military replica of the sanctuary of Sant Salvador.

One of the most notable, located next to Portocolom, a few kilometers from the sanctuary, is that of es Closos de Can Gaià. Dating from the pre-Talayotic era (1800 BC), it was used until the beginning of the Talayotic period (750 BC), more than a thousand years of use.

From which you can enjoy an impressive panoramic view. We can enjoy the views while having a coffee, a light meal, or, close to sunset, a cocktail.

To eat, we have at our disposal a restaurant that offers a daily menu as well as a menu with different specialties made with fresh products.

We have at our disposal double rooms, but also apartments with two rooms with four beds, to choose with or without terrace, in case we are going to stay in a group.

In the vicinity of the sanctuary of Sant Salvador there are several rural farms for vacation rental, as well as agrotourism

In Felanitx there is also a hotel, and in Portocolom, further afield, we have several hotels and aparthotels to choose from, between one and four stars.

History of the sanctuary of Sant Salvador

In 1348 a plague epidemic ravaged all of Europe, and Majorca was not alien to it. Across the island it is estimated that almost 20% of the population died, but in Felanitx in particular the mortality could reach 50%.

The sanctuary further increased its fame as a pilgrimage site

To attend to the pilgrims, the inn was built. Also a monastery through which several religious congregations have passed. In the sixteenth century a primary school was established there, and in the seventeenth century it served as a watchtower to prevent attacks from Berber pirates.

In the 15th century an image of the Virgin was found, which is currently kept in the church of the sanctuary

Thus, devotion to the Savior gave way to devotion to the Virgin Mary. That is why the sanctuary is currently under the protection of the Virgin, and its full name is Santuari de la Mare de Déu de Sant Salvador.

The old medieval church was too small to cater for the growing number of devotees, so it was enlarged, or a new one was built between the 16th and 17th centuries, it has not been possible to establish with certainty. This church once again became small, so in 1707 the construction of the one that is preserved today began, and it was completed and consecrated in 1716.

In 1885 the Felanitx city council, owner of the sanctuary and its lands after the confiscations, auctioned the property. The new owner, the felanitxer Juan Antonio Puig, who was the bishop of Puerto Rico, donated the sanctuary to the diocese of Mallorca, which still owns it to this day. In 1891 a new hermit congregation was established and managed the sanctuary for a century, until 1992.

In 1910 a chapel was built in the place where according to tradition the image of the Virgin was found in the church.

Between 1930 and 1942, major improvements and renovations were made to the entire sanctuary, including the construction of a new altar.

In 1928 the construction of the monument to Cristo Rey began, which was completed in 1934

The last major reform was carried out in 2002

With the renovation of the old 18th century inn to turn it into a modern 21st century accommodation.

Take a look at the Sanctuary of Sant Salvador in 360º