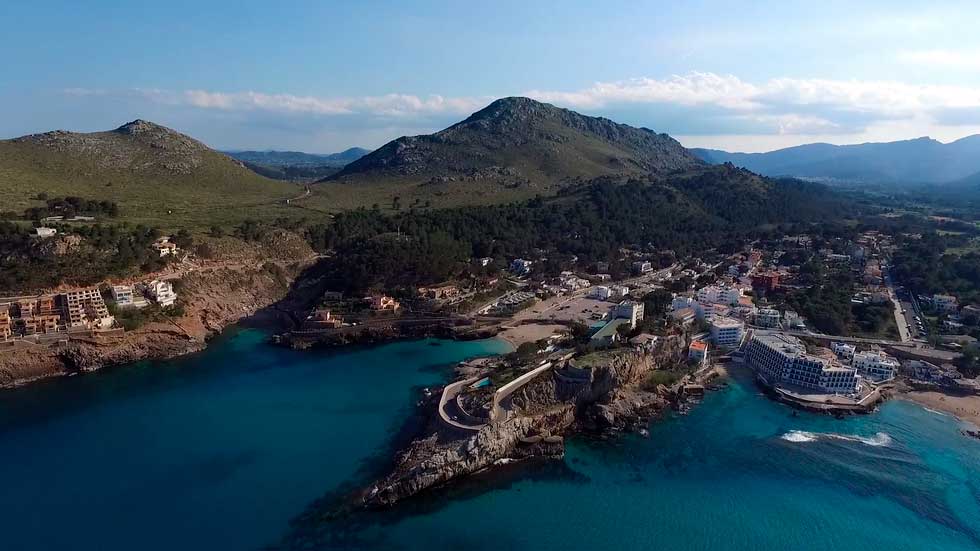 Cala San Vicente (or Cala Sant Vicenç) is a small town in the north of Mallorca, in the municipality of Pollensa, halfway between Pollensa and Puerto de Pollensa. It has slightly less than 300 inhabitants, although during the summer months its floating population increases markedly.

Its natural environment, its landscapes and its calm atmosphere attracted travelers from all over the world, and in particular a good number of artists who captured in their works the sensations that this environment transmitted to them.

The coast of Cala San Vicente is divided into four coves

Each one with its own peculiarities, which makes it a very attractive destination for modern tourism: Cala Barques, Cala Clara, Cala Molins and Cala Carbó.

But in addition to the sun and beach in its surroundings, you can continue to enjoy natural landscapes of great beauty

Such as the Cavall Bernat, or the pine-covered mountains that reach the sea. Its environment also has a rich history, which the visitor can discover by visiting the caves of l’Alzinaret. 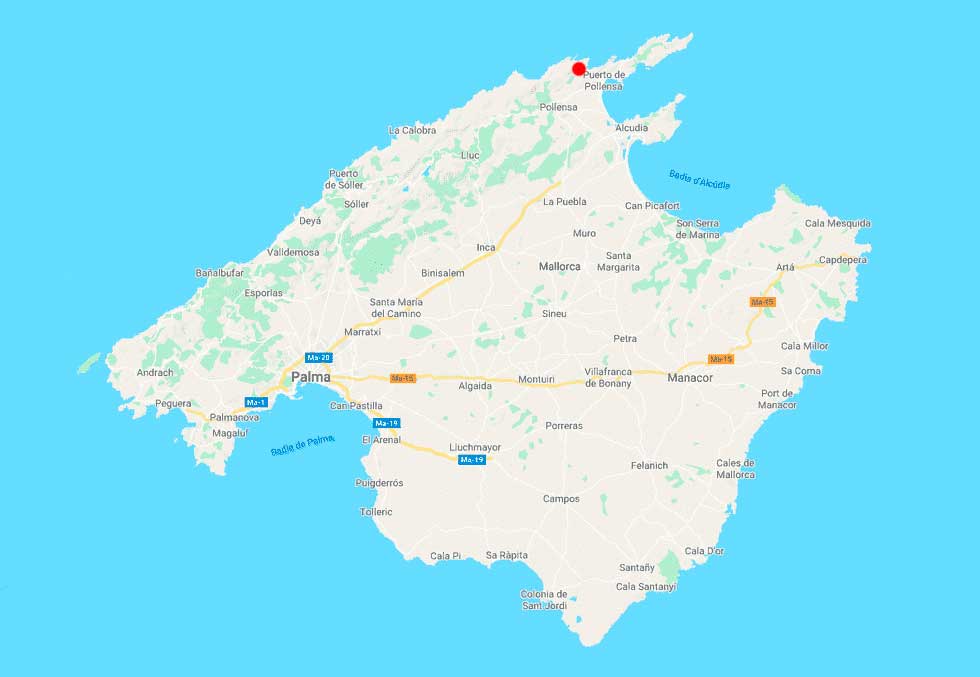 How to get to Cala San Vicente

How to get to Cala San Vicente by public transport

This small town is also a popular bicycle touring destination

Most of the roads in the area have bike lanes or are good enough to circulate on them with some security.

Cala San Vicente is basically a summer tourist destination. The four coves that together form Cala San Vicente (Cala Barques, Cala Clara, Cala Molins and Cala Carbó) offer different experiences for all tastes: fine sand beaches, pebble and stone beach, and rock cove. Keep in mind that not all have the same services.

If we do not have the necessary equipment there are several facilities where we can rent it.

But in addition to this marine fauna, the bottoms of Cala San Vicente hide smaller wonders.

If we are fond of diving we can try to discover in these waters the remains of sunken ships from all eras, from the ancient Greeks to the 20th century.

Many sailors discovered too late that these coves are not a good refuge when the north wind blows, their boats being dragged against the rocks.

Precisely if the sea does not accompany us, we can enjoy various activities on land

A very simple hiking route is the one that runs through the so-called Camí dels Presos, so-called because it was built by prisoners during the civil war to install coastal artillery pieces. It is also called the Coves Blanques, because of the caves excavated at the end of it that must have been ammunition stores, although they were never used.

A slightly more difficult route is the one that takes us to the Puig de Cornavaques.

Finally, for hikers who are looking for a greater challenge, we have the route that runs through the Cornavaques, l’Àguila and La Mola hills.

When we do any of these routes, or we are sunbathing in any of the coves, let’s not lose sight of the hill called Cavall Bernat, to see if we can discover the play of light and shadow cast by the silhouette of a horse on the cliff.

Finally we cannot stop visiting the l’Alzinaret necropolis, probably the most spectacular hypogeum (artificial caves) in all of Mallorca. As we have said, these caves date back to the pre-Talayotic period (Middle Bronze Age, 1600 BC). They have been known for centuries and have already been looted in time immemorial. In modern times they were first studied in the late 19th century, and more in detail by the British archaeologist Wilfrid James Hemp as early as the 20th century. The set of caves he cataloged consisted of 15 rooms, of which there are now only eight.

The hypogeum is very close to the entrance of Cala San Vicente, we must take the first street on the right and then the left. On a undeveloped plot a megalith (placed in recent times) indicates the location of the set of caves. A somewhat worn panel with a plan and the explanatory text in several languages ​​will be of great help to identify the different caves. These are in different states of conservation. They contain some elements such as holes or modern cavities, practiced by smugglers who used the caves for their business or during the civil war.

Due to its small size, Cala San Vicente is not a good place for shopping beyond what is necessary for day to day, but in nearby Pollensa we do have a good number of craft shops. On Sundays there is a traditional market, while in Puerto de Pollensa it is held on Wednesdays.

Although Cala San Vicente has remained on the fringes of mass tourism, it has an important and varied range of accommodation

On the one hand we have 2, 4 and 5 star hotels, to adapt the stay to all budgets. There is also a good offer of tourist apartments, chalets and villas.

The environment of Cala San Vicente was populated since ancient times, at least from the pre-Talayotic era (Middle Bronze Age), as attested by the s’Alzinaret necropolis, dated around 1600 BC.

It is likely that human settlement was practically uninterrupted in the area for centuries. In the surroundings, remains of the Talayotic era have been found. The city of Bocchoris was founded in the nearby area of ​​Cala Bóquer in approximately 1400 BC, which survived until Roman times, being a federated city until at least the 1st century.

This city of Bocchoris was dwindling in the following centuries, partly due to the rise of nearby Pollentia (in present-day Alcudia), and partly due to the dispersion of the population in small rural towns. This dispersion was accentuated with the destruction of Pollentia by the Vandals, and the following occupations by the Vandals themselves, then by the Byzantines, and finally by the Muslims. It is documented that in Islamic times in the area of ​​the current Cala San Vicente there was a farmhouse.

In the Llibre del Repartiment of 1232, which reflects the distribution of the territory of Mallorca after the Christian conquest of 1229, the aforementioned Alcheria Sant Vincent appears, and it was awarded to the Templars. In 1298 it is cited as Alqueria Sant Vicens, and in 1302, as Alquerie Sto. Vincent. It is in 1417 when the place name of Cala de Sant Vicent appears for the first time when the arrival of five Moorish slaves fleeing from Barcelona and who landed in this cove is recounted.

According to popular tradition, the name of Cala San Vicente would come from the fact that the preacher and future Valencian saint Vicente Ferrer, would have landed in Cala San Vicente during his trip to Mallorca in 1413. However, it is known that he actually landed in Palma and he traveled the rest of the towns he visited by land, and we have also seen that the name of San Vicente was already used centuries ago. Most likely, the place name comes from the Arabic words sanad wizan (opposite slope), which would refer to the relief of the cove.

Due to the activity of pirates and corsairs, many coastal settlements in Mallorca were abandoned and the population concentrated in inland towns. This explains why on an island the vast majority of large populations are far from the sea, and the Pollensa area was no exception. Between the end of the 14th century and the beginning of the 15th Cala San Vicente became uninhabited, and it is documented that Turkish corsairs frequently anchored in the cove, who went ashore to get water from a nearby source and roamed freely by the holm oak surrounding it.

In the early 15th century, the inhabitants of the area financed and built a defense tower. In 1434 a Torre de Sant Vicent appears inventoried, but its defensive utility was very limited. Of course, there is a documented confrontation of 1531, when 500 Turkish corsairs landed in the area. The local militia was alerted from the San Vicente tower and ambushed the Moors, allowing them to pass and cutting off their retreat. Some 60 of these raiders were killed, leaving many of those who managed to flee wounded, and taking several prisoners.

However, this tower provided only a very precarious defense, so in 1571 another was built in the place still called Punta de la Torre today, which separates Cala Clara and Cala Molins. This tower was already equipped with guns, to prevent corsair ships from even trying to get close to the interior of the cove, much less to disembark. With the end of piracy in the Mediterranean this tower fell into disuse, and ended up being demolished in 1952.

During all these centuries the main function of Cala San Vicente was to be a fishing port. In fact, in many nautical charts it appeared with precisely that name, Port Pescador. However, this begins to change at the beginning of the 20th century. An emerging tourism industry in Mallorca appears, with the Pollensa area being one of the main centers. And specifically in Cala San Vicente the Niu pension is inaugurated.

This pension was the accommodation of precisely an important number of renowned painters from all over the world who followed in the wake of Santiago Rusiñol. This Catalan painter had already discovered the magnificent landscapes of the Tramuntana mountains at the end of the 19th century. The also Catalan Anglada Camarasa took refuge in Mallorca fleeing World War I from his workshop in Paris, being followed by many of his students.

Another famous painter who lived in Cala San Vicente was the Valencian Joaquín Sorolla, the so-called “painter of light”, who knew how to capture the particular light of the Mediterranean coasts like no one else. In 1919, after visiting Ibiza, he was invited by his disciple Llorenç Cerdà to Cala San Vicente. There he was impressed by the particular lighting of the cove to the point of exclaiming “that light, that light, it is impossible to paint!” while working on one of his works.

The crisis of the 30s and especially the civil war cut short the progress of this new industry. However Pollensa in general, and Cala San Vicente in particular, had already made a place for themselves among certain European intellectual elites, and with the resurgence of tourism in the 50s, and especially with the boom in the 60s, the town definitely changed. its character as a small fishermen’s enclave due to its top-level tourist location, but maintaining a certain exclusivity, without falling into the excesses of other areas of the island, and in that line it has remained since then.