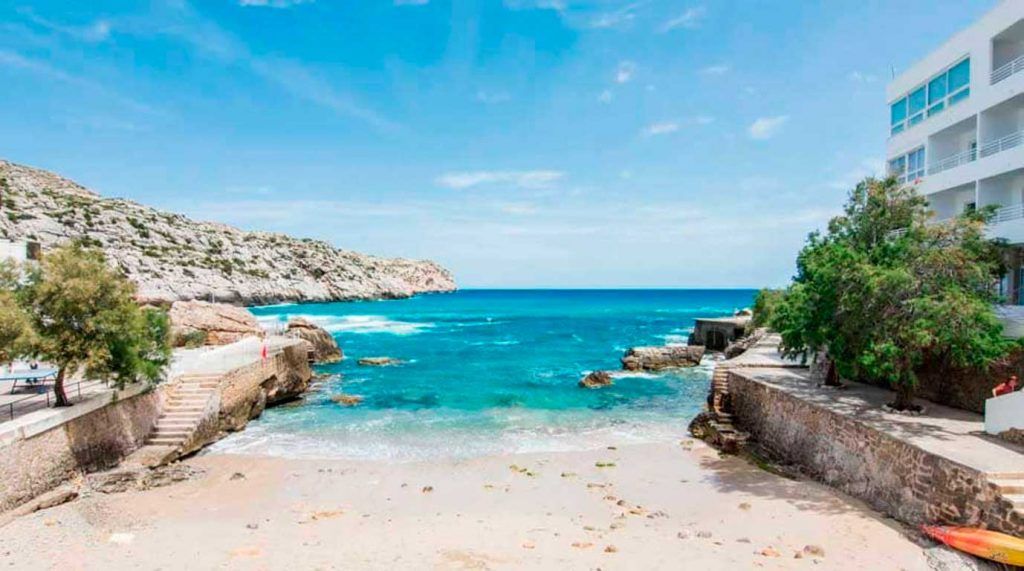 Cala Clara is one of the four coves that are part of the Cala San Vicente complex, in Pollensa, in the north of the island. It receives its name for the fine white sand and the clarity of its waters. Keep in mind that although the beach is sandy, the seabed is rocky. The sandbank itself is about 20m long and 25m wide. It is separated from Cala Barques by the so-called Punta dels Ferrers, and from Cala Molins by the Punta de la Torre, named after the medieval defense tower that stood there until the 1950s.

The beach is not particularly accessible since you have to go down a long stone staircase, but in return you gain some tranquility compared to neighboring Cala Barques. However, in summer it can also get crowded, especially for the clients of the hotel that is built just behind the beach.

The environment of Cala Clara is completely urbanized. As a vestige of its past as a fishing port, there is a small dry dock and a refuge for boats, but the cove has been sandwiched between a hotel on one side and houses on the other. It has little to do with the environment that Sorolla captured in his paintings just over a hundred years ago. Despite the proximity to the buildings, the unevenness between them and the sea give a certain sense of isolation, even privacy, and in any case, both the beach and the waters are kept perfectly clean.

In summer it should be borne in mind that many northern beaches suffer from the presence of jellyfish, and Cala Clara is no exception. Especially in the area near the rocks a good number of them can be grouped. Another danger is the strong surf that rises when the north and northeast winds blow. 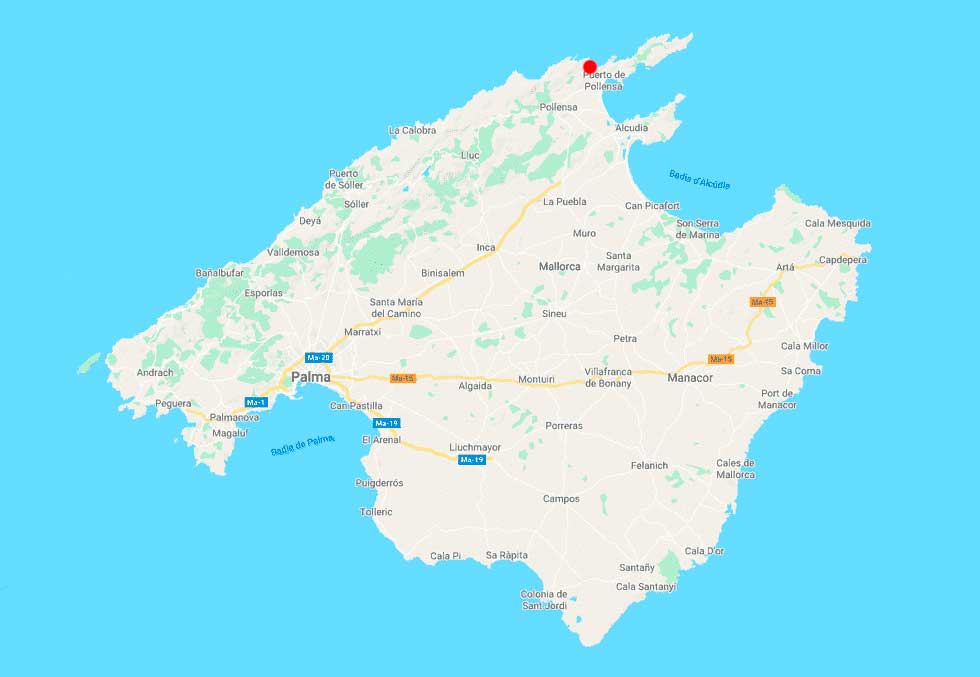 How to get to Cala Clara

From Palma and the south of Mallorca, we will go along the Ma-13 motorway to the north, until exit 40, where we will continue towards Pollensa. We will follow the indications towards Puerto de Pollensa taking the Ma-2220 road, which borders Pollensa. When we take the road that leads us to Puerto de Pollensa, we will continue for 1.5 km, until the intersection of Cala San Vicente. We will turn left to take the Ma-2203, and after 3 km we will have reached Cala San Vicente.

From the north of Mallorca we can take the Ma-12 road, which runs from Artá ​​to Puerto de Pollensa, and which passes through Can Picafort, Playa de Muro, and Puerto de Alcudia. We will follow the indications to Alcudia and then take the Ma-2220, which will lead us directly to Puerto de Pollensa. At the entrance roundabout we will take the third exit, to stay on the same Ma-2220, up to the seaplane roundabout. There we will take the fourth exit to join the Ma-2200, towards Pollensa. At 3.6 km we will reach the junction of Cala San Vicente, where we will turn right.

The entrance to Cala San Vicente is an avenue that will take us directly to the accesses to Cala Barques and Cala Clara. In low season there is plenty of parking near the accesses to the beach, but in high season we will have to look for it a little further. At the end of that avenue there is a viewpoint, and to your right are some stairs (marked) where the descent to the beach begins.

To get to Cala Clara by public transport we have several options depending on where we are going from. The bus stop is just in front of the stairs where you access the beach.

This area of ​​Mallorca is also highly appreciated by cycling fans and it is very common to find cycling groups in Cala San Vicente. Next to the bus stop there is a bicycle parking.

Although you can get to Cala Clara by boat, it is not recommended. As the bottom has a very gentle slope, we have a depth of about 3 m, 300 m from the beach. In addition, anchoring is not recommended here because the cove is open to the north and is highly exposed to those winds.

Unlike the neighboring Cala Barques, in Cala Clara we do not have any lifeguard service, nor do we have showers or toilets. There are also no hammock or umbrella rentals, although they can be brought from Cala Barques.

There is no beach bar or spa on the beach, you will have to go up to the nearby bars and restaurants to cool off.

The environment of Cala Clara offers us various leisure possibilities. In general, the beach is very sheltered from winds and currents, making it very suitable for spending a beach day with the family. We should only have the foresight to bring sandals to avoid hurting our feet with the rocks that are already a few meters from the shore.

Due to its small size, it is not a very practical place for canoeing or paddle surfing, because as soon as the cove is there we will meet people. On the other hand, it is very suitable for diving and snorkeling.

A few meters deep and thanks to the great clarity of its waters we can find large schools of colored fish, and with any luck we can find an octopus in the rocky area. Further out to sea we can dive in search of more samples of marine fauna on the sandy bottoms, and also of the remains of shipwrecks of more than two thousand years old. In the waters between Cala Clara and its neighboring Cala Barques the remains of a Greek ship from the 5th or 6th century BC were found, just 7 m deep and close to the beach.

But on land we also have a good handful of activities for all tastes. For hiking fans there are several routes that start or end near Cala Clara. From the pine forest next to the entrance avenue to Cala San Vicente, begins the hike to l’Àguila that passes through La Mola. It is of little difficulty and can be done even with children. Somewhat more complicated is the route that goes to Cornavaques. And in the same area is also the road to the Coves Blanques or Camí dels Presos, a road made by Republican prisoners during the Civil War to a location where several pieces of artillery were to be installed.

If we are interested in the rich history of this area of ​​Mallorca, we must visit the necropolis of l’Alzinaret. It is very close to the entrance of Cala San Vicente, on the first street on the right. A talaiot (modern) in a field marks the area where this set of artificial caves, both funeral and residential, built around 1600 BC is found.

Finally, we can enjoy the local gastronomy in several restaurants near Cala Clara, specialized especially in fish and seafood. There is also a park near the bus stop with tables and benches where we can eat peacefully.

If we are cycling fans, Cala San Vicente is a good starting point for many routes around Mallorca, and if we are not staying nearby, we can always have it as a stopping point.

Cala Clara is at the foot of two hotels on one side, and on the other there are several blocks of flats, some of which are available for vacation rental. Nearby we also have villas and chalets available. In Cala San Vicente we have several hotels of two, four and even five stars, for all tastes and budgets. If we do not find accommodation in the cove itself, we have Pollensa and Puerto de Pollensa very close where there is a greater offer of accommodation, both hotels, apartments, chalets and villas.