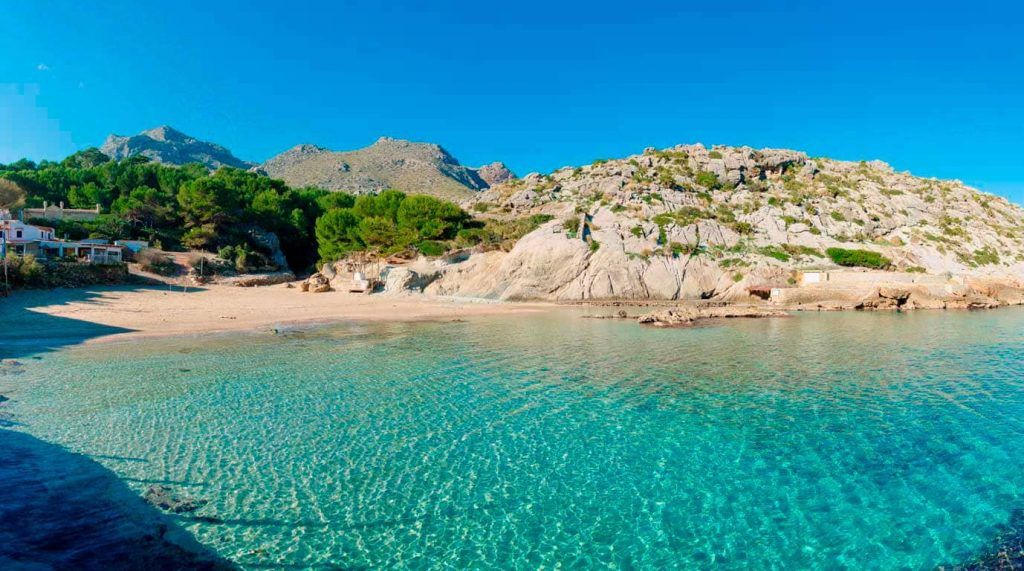 Cala Barques is a sandy beach located in the small town of Cala San Vicente, in the municipality of Pollensa, in the north of Mallorca. It is a sandy area of ​​about 70 m in length and 40 in maximum width. At both ends it is flanked by rocky areas, and constitutes the mouth of the Les Rotes Velles torrent, which descends from nearby La Mola. On its left side it also has a small dry dock, a reminder of the origin as a fishing town of Cala San Vicente.

The beach is ideal for families as its waters are clean and normally calm, and the sand is fine and also kept clean. The beach has a gentle slope, and there is even an access walkway for people with reduced mobility.

The environment is fully urbanized. On the one hand it has a small dry dock, there are also small houses, some retain their residential use and others are dedicated to vacation rental, but there are two large hotels very close to the beach. One of them is the Niu hotel, originally a pension and the first tourist establishment in Cala San Vicente, and which housed painters of the category of Anglada Camarasa and Joaquín Sorolla, who through their paintings made Cala San Vicente known to the world in general, and Cala Barques specifically.

The ease of access, the services that can be enjoyed on this beach and the presence of these hotels and tourist accommodation mean that in the summer months Cala Barques becomes somewhat saturated. If what we are looking for is a quiet environment we will have to avoid the peak summer months, or opt for one of the other nearby coves.

It is important to note that jellyfish appear in this cove with some frequency in summer. Be aware of notices that indicate their possible presence. We can also find sea urchins hidden in the sand. Due to its opening to the north when the tramuntana blows, the waves are very strong, bathing being totally prohibited in those circumstances. 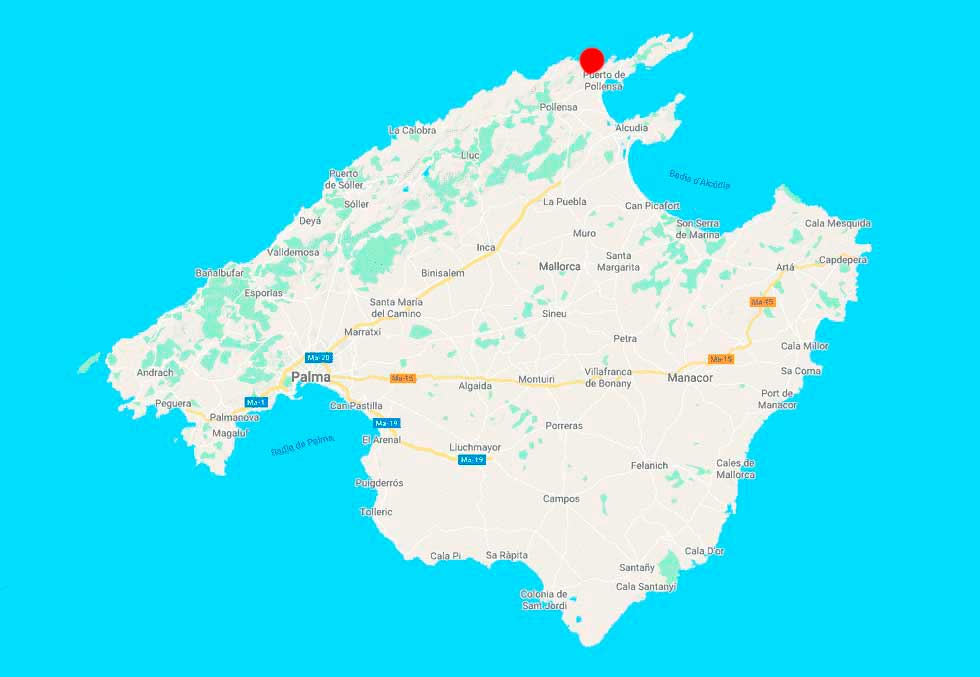 How to get to Cala Barques

If we are in Palma or in the south of Mallorca we will take the Ma-13 motorway, leaving it at exit 40 towards Pollensa. We will follow the indications to Puerto de Pollensa taking the Ma-2220 road that surrounds Pollensa and we will follow it for 1.5 km, when we arrive at the junction of Cala San Vicente. We will turn left to take the Ma-2203, and after a little over 3 km we will finally arrive at Cala San Vicente.

If we are already in the north of the island, we will take the Ma-12 road, which connects Artá ​​with Puerto de Pollensa, passing through Can Picafort, Playa de Muro, and Puerto de Alcudia. We will follow the indications to get to Alcudia where we will link with the Ma-2220 that will take us to Puerto de Pollensa. At the roundabout we will exit at the third exit, to take the same Ma-2220, until the roundabout of the seaplane. There we will take the fourth exit to join the Ma-2200, towards Pollensa. At 3.6 km we will reach the junction of Cala San Vicente, where we will turn right.

When we arrive at Cala San Vicente there is a long avenue that will take us directly to Cala Barques. Outside the high season it is easy to find parking very close to the beach, but in the central summer months we will have to look for it a little further. At the end of that avenue there is a viewpoint, and from there we can go down to the beach either by a series of stairs, or by a long slope that gently descends to the left.

If we want to get to Cala Barques by public transport we have several options depending on where we are going from. The bus stop is just in front of the stairs where we can access the beach.

It is also possible to get there by bicycle. Several cycling routes pass near Cala San Vicente, and next to the access to Cala Barques there is an area where we can park our bicycles.

It is also possible to access Cala Barques by boat. The seabed is perfectly suitable for anchoring boats and access is very easy. You just have to be careful with several stone slabs near the surface about 200 m from the beach, and that in summer it can be very busy with small and medium-sized boats.

Being in a fairly urbanized environment, Cala Barques is very well equipped with services. In the summer months there is a lifeguard service. It also has toilets and showers, and umbrellas and hammocks are available. There is also space to lay our towel on the sand, or even in the flat rock areas at the ends of the beach, although in summer it is advisable to go early to find a place.

There is no beach bar in Cala Barques, but a few meters above it there are several bars and restaurants where you can have a drink or ice cream.

Cala Barques is a good place to spend a day at the beach and offers us a good variety of activities. Except if there is a northern storm, it is a perfect place to swim calmly and lie in the sun. If we can avoid the crowds of mid-summer we will also enjoy a beautiful natural environment.

It is a good place to practice canoeing and paddle surf, although in Cala Barques itself there are no facilities to rent this equipment (it does in the nearby Cala Molins). It is also a good area for diving. Near the beach, between Cala Barques and neighboring Cala Clara, the wreck of a Greek ship from the 5th or 6th century BC was discovered, just 7 m deep. And in the entire cove there are more shipwrecks, both from that time and more recent, victims without a doubt of those storms that we have mentioned.

A curious phenomenon that can be observed in Cala Barques when the sea is very calm is the presence of a freshwater spring that flows in the middle of the sea. Known since time immemorial, and documented by Archduke Luis Salvador in his complete study on the Balearic Islands, it allowed ships to carry fresh water without having to disembark.

If the weather is not good for bathing we also have several activities to do inland. From the pine forest near Cala Barques we can start the hike to l’Àguila that passes through La Mola. It is an easy hike that can be done in family. If we want a slightly bigger challenge we have the route that takes us to Cornavaques. In the same area we also have the Coves Blanques or Camí dels Presos road, a set of roads, trenches and caves where artillery pieces and powder kegs were to be placed during the Civil War, although they were never installed.

If we are interested in cultural activities we should not miss visiting the spectacular necropolis of l’Alzinaret, right at the entrance of Cala San Vicente. It is a hypogeum (set of artificial caves) dated to the pre-Talayotic period (approximately 1600 BC).

Finally, to regain strength we have several restaurants next to Cala Barques itself, specializing in Mallorcan cuisine but with international cuisine on its menu. Very close to the bus stop there is also a small picnic area with several tables and wooden benches where we can quietly enjoy our own food.

As we have already mentioned, the environment of Cala Barques is also very suitable for groups of cyclists. Although the last section of the access road to Cala San Vicente does not have a bicycle lane, it is relatively safe, and the nearby roads are better adapted. Then we will find parking lots where we can park the bicycles. 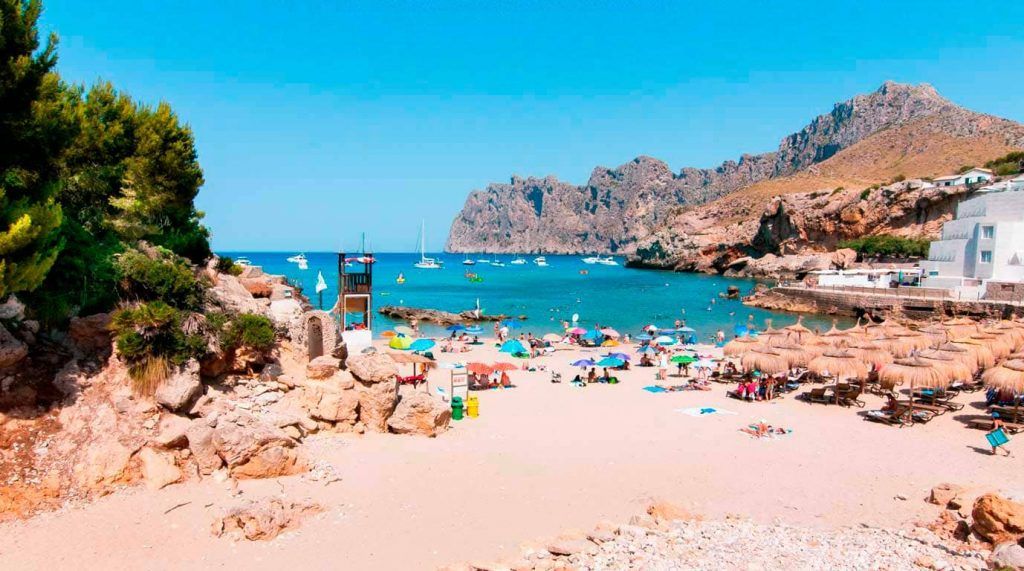 Just above Cala Barques there are two four-star hotels, in addition to several tourist apartments. In the avenue that leads to the cove there are several chalets and villas of different prices. In the nucleus of Cala San Vicente there are hotels from two to five stars, and in the nearby towns of Pollensa and Puerto de Pollensa we will have a more varied offer even in type of establishment and prices.