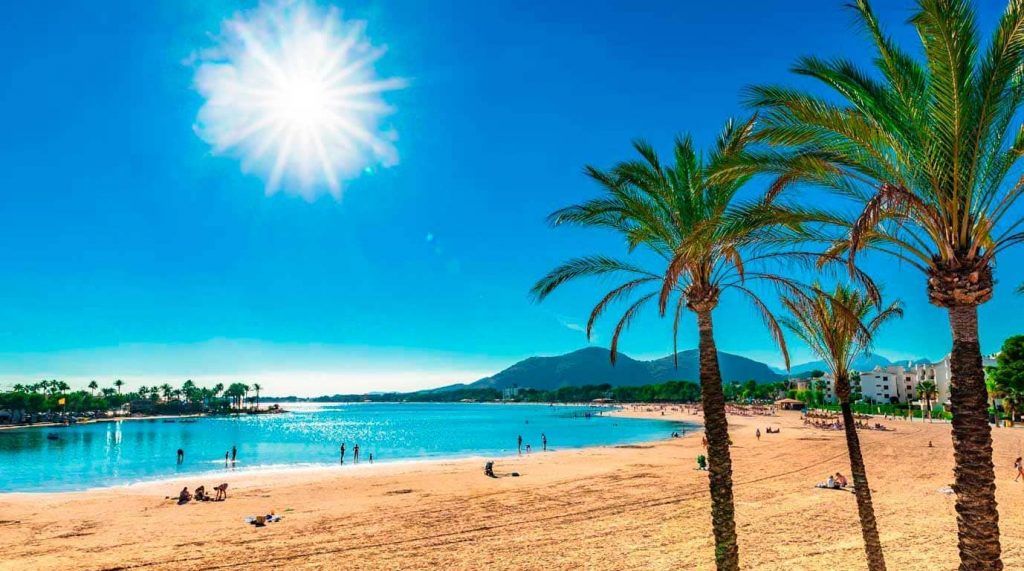 Alcudia beach is a huge 3.4 km long sandy beach that occupies the north end of Alcudia bay. It is in fact the largest beach in the north of Mallorca. It is separated from Playa de Muro by the Siurana Canal, which constitutes the mouth of the Albufera de Alcudia. Together, Alcudia beach and Muro beach form a beach of more than 5 km in length.

The beach is about 80 m wide. Being protected on the north side by Cabo Pinar, its waters are usually very calm and very shallow, which makes it a perfect place to enjoy with the family. You have to go many meters from the shore to have some depth. It also has access for people with reduced mobility.

The construction of some groynes in the bay and the very dynamics of the coastline make the beaches of the center and east of the bay (Playa de Muro and Can Picafort) lose sand, which is deposited by the currents on the beach of Alcudia. Unfortunately they also bring remains of dead posidonia that has to be cleaned regularly to avoid bad odors. But usually both the sand and the bottom of the bay are cleaned regularly.

Alcudia beach has already become a totally urban beach. Its back is crossed by a wooden promenade where shops, restaurants, bars, hotels, entertainment venues and other tourist service establishments follow one another. However, the great width of the beach, together with the clear views of the sea from the shore, make it not overwhelming at all.

In the months of July and August there may be some crowding, but the size of the beach always allows you to find a place to lie down with some tranquility. 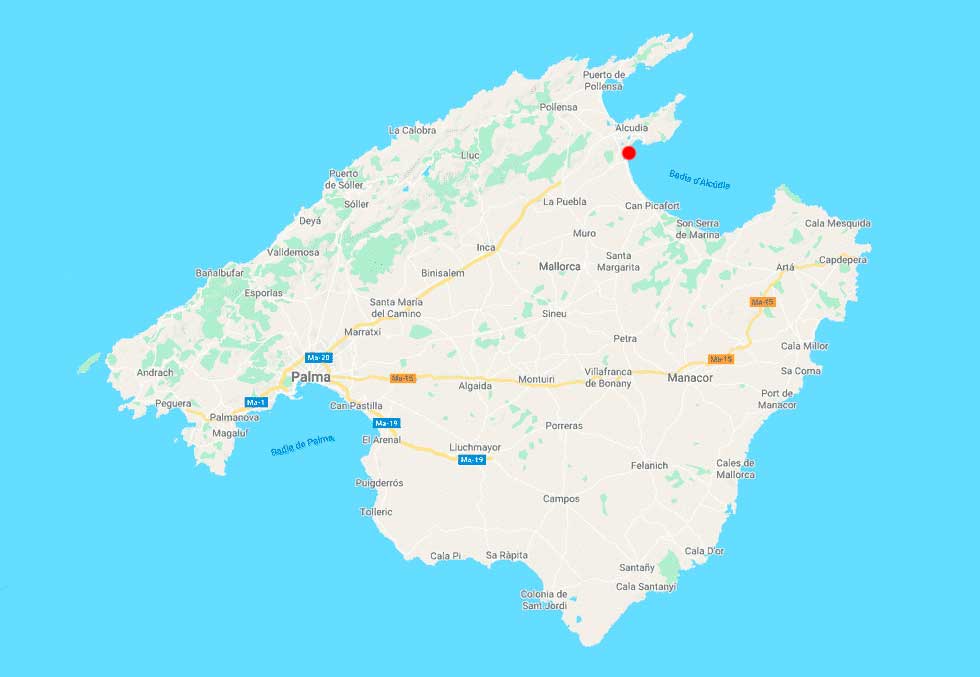 How to get to Alcudia Beach

Access to Alcudia beach is very simple. If we leave Palma we will take the Ma-13 motorway, which we will cover entirely. At the end of it we will stay on the Ma-13 road. At 4.7 km we will reach a roundabout where we will continue straight. After another kilometer we will come to a large roundabout, we will stay in the right lane to take the Ma-3460. At the next roundabout we can take the first exit, towards the Ma-3470, and then after about 200 m turn left, towards Avenida Tucán, and go straight on. We will go through two roundabouts, where we will continue straight to stay on the same avenue, and at the end of it, near the bus stops, we can find parking.

Alternatively at the last roundabout (with a sculpture of some ties) we can take the first exit towards the Artá ​​road and look for parking in this area. From here the beach is less than 300 m.

From the Levante area the best option is to go to Manacor and from there take the Ma-3322, following the signs to Son Serra de Marina. We will stay on this road for 15 km until we reach a crossroads, where we will turn left to join the Ma-12, which runs through the north of Mallorca. After about 10 km we will arrive at Can Picafort. We will cross the town without leaving the avenue, and we will follow the same Ma-12 to Playa de Muro, and finally to Puerto de Alcudia.

Alcudia beach is very well connected to the rest of Mallorca by public transport. Line 351 connects Palma with Playa de Muro, passing through Alcudia and its beach. Line 352 that runs through a large part of northern Mallorca, from Can Picafort to Puerto de Pollensa, also stops at Alcudia beach. There is also a direct bus from the airport, line A32, which goes to Playa de Muro and Can Picafort. These three lines have four stops near the Alcudia beach. The closest, near the marina, are just 50 m away. Those close to spas 3 and 5, about 250.

In the summer months, line 353, which runs from Can Picafort to Formentor, and line 354, to Puerto de Sóller, also stop at Alcudia beach. From the tourist center of Cala Ratjada we can take line 446. From Portocristo we can take 445, which passes through some of the coastal towns in the Manacor region, and also reaches Artá.

Given the shallow depth of the bottom, it is not possible to anchor on the beach itself. If we want to arrive by boat we will have to go to the Alcudiamar sports port, the second largest port in the Balearic Islands, with 730 moorings. Here boats from 6 to 30 m long can dock.

As befits a first-class tourist destination, Alcudia beach has all kinds of services to provide us with a comfortable and pleasant stay. It has a lifeguard service and bathers have showers available. There is also a sun lounger and hammock rental service, but there is a large strip of free beach to spread our towels and stick our parasol. There are several access points for people with mobility problems.

Throughout the entire walk there is a wide variety of bars and restaurants, as well as shops offering all kinds of products and services that we may need on our beach day.

The shallow depth of the water makes it a perfect beach to spend a day at the beach with young children, as they do not lose foot in many meters. In the area closest to the marina, the wind and waves are practically non-existent, adding even more tranquility. Apart from this there are several playgrounds where our little ones can also make their own out of the water. The more than 3 km of Alcudia beach offer us a great variety of activities.

We can find from the most classic: canoe, paddle and paddle surf rental, to the newest such as flyboarding. We will also be able to rent jet skis, motorboats, practice paragliding or hire fun trips on a banana boat, or more relaxed on a catamaran.

You can also practice windsurfing, with the possibility of renting the equipment, but the low wind in this part of the bay makes it especially desirable for beginners, not for experts. The same can be said of diving. There are several diving schools in Alcudia beach, but its waters are not the best given its shallow depth. Yes, trips to better dive sites are organized, for example in the nearby Cabo Pinar, where the cliff sinks into the sea and creates spectacular underwater structures.

Out of the water we also have many activities to enjoy Alcudia beach and its surroundings. At the western end there is a small playground. There are also gymnastic facilities for adults at various points on the beach, as well as nets for practicing beach volleyball.

Cycling fans will discover that this point is perfect for discovering new cycling routes. They can travel the smooth roads that line the coast towards Can Picafort and beyond (with a bicycle lane in many sections). They can also go to Pollensa and from there dare the slopes of the Sierra de Tramuntana. Or head inland to discover the Pla de Mallorca.

The eastern part of Alcudia beach borders the Albufera de Mallorca natural park, the largest wetland in the Balearic Islands. In addition to the birds that habitually inhabit the park, it is a stopping point for numerous species in their migrations between Africa and Europe. In total, more than 300 different species have been observed. In addition there is a great variety of invertebrates (more than 450 species). Small mammals, reptiles and amphibians complete the fauna, in addition to the fish that cross the channels.

If we are interested in the ancient history of Mallorca, a visit to the ruins of Pollentia is essential, which, contrary to what might be thought, was not located in present-day Pollensa, but in present-day Alcudia. The city was founded in 123 BC by Quintus Caecilius Metellus Balearicus, conqueror of Mallorca for Rome, very shortly after the conquest. It was the capital of Roman Majorca and in the times of the Emperor Augustus it had an extension of 16 Ha. It had two ports: one on each side of the Cape Pinar peninsula. The port of Levante was very close to the current Alcudia beach.

In the town of Alcudia itself there are numerous remains from the Roman, Arab and medieval times, highlighting its fourteenth-century walls. During the Germanías uprisings of the early sixteenth century they protected nobles and landowners, but suffered great damage. They were restored at the end of the same 16th century, but they partially collapsed again at the end of the 19th. The complex houses the medieval and Renaissance Alcudia, its shops and restaurants, many of them located in old manor houses.

But going back to the beach, on the same promenade we have a splendid offer of bars and restaurants, where you can cool off, recharge, or enjoy a few drinks in front of the sea. The area closest to the marina is somewhat more expensive and exclusive, becoming more affordable as we get closer to Playa de Muro.

The port of Alcudia, where this beach is located, offers more than 26,000 accommodation places, making this area the main tourist center in the north of Mallorca. Mainly, these are hotel rooms of all categories, followed by aparthotels, tourist flats and, finally, exclusive villas and villas nearby.

Without a doubt, near Alcudia beach we will find the type of accommodation that suits our tastes and budget.