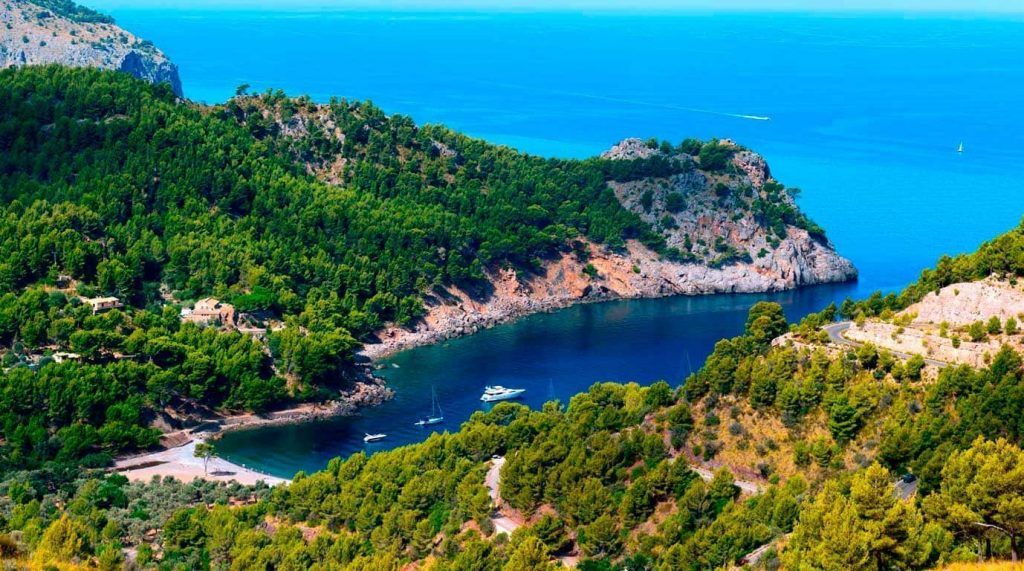 Cala Tuent; idyllic cove in the heart of the Sierra de Tramuntana

Cala Tuent is one of the few beaches in the Sierra de Tramuntana, and for many it is the best. Located in the municipality of Escorca, it is a small sandy area about 150 m long and 50 wide at the bottom of a semicircular sea inlet surrounded by pine-covered mountains. Under water the sand quickly disappears to form a bottom of gravel and rock.

Its waters are clean, transparent and crystalline

The rocky bottom and the reflection of the pine groves give them an emerald tone of great beauty. The Gorg des Diners stream flows into them, which rises from Puig Major, the highest mountain in Mallorca, and at whose feet is Cala Tuent.

In any case, taking into account that the bottom is always stony, the use of sandals is recommended, especially for children. Like all the coves of the Sierra de Tramuntana, you have to be very attentive to the waves and the currents that form.

Despite the charm and beauty of this cove, its occupation is usually at most average.

There isn’t much parking nearby, and the popularity of nearby Sa Calobra takes away many visitors.

On its right bank, near the parking area, there is a boathouse, a small wooden pier and an old fisherman’s house. Besides the access ramps and some stone walls, they are the only constructions in the cove.

In fact, it is a popular destination to visit by boat. Despite that, it is not the ideal place because of what has already been said: it is very exposed to the north winds.

How to get to Cala Tuent

Access to Cala Tuent is simple in the sense of the signposting, but extreme caution must be exercised when dealing with mountain roads. Of course, the views that can be seen all the way are a spectacle of overwhelming beauty, with the slopes of the mountains and the cliffs dropping hundreds of meters to the sea.

From here the road is especially winding

Including the famous Nu de sa Corbata (Tie Knot); a 270º curve where the road passes under itself.

Near the coast there is a fork: to the right we can continue towards Sa Calobra, but to go to Cala Tuent we will take the detour to the left. We just have to go straight on (passing the restaurant crossroads on the other side of the cove) and we will arrive at a toll parking area.

We will cross Selva and Caimari and at the access junction to the monastery we will have to follow the signs to Sa Calobra again. From Palma you can also take this route, thus avoiding the section of Sóller and Fornalutx curves.

Finally from the north (Alcudia and Puerto de Pollensa) the shortest route passes through Pollensa, taking the Ma-10 towards Lluc, and follow the indications to Sa Calobra, and then to Cala Tuent.

On the other hand, both Cala Tuent and Sa Calobra are popular destinations to get there by bicycle, although the ramps and slopes mean that they are not suitable routes for everyone.

Cala Tuent in particular is the arrival point for some hiking routes, the most popular of which is the Sa Costera route, from Sóller.

We have already commented that anchoring in Cala Tuent is not especially recommended due to the force of the winds in this part of the coast.

Even so, if the sea is calm, it is possible to anchor in the cove. The bottom is sand, gravel and rock and has a depth between 6 and 8 m. There is a swallow service from the Puerto de Sóller that goes to Cala Tuent.

In Cala Tuent we will not have any service: no bathrooms, no showers, no lifeguard service. At most we will have the restaurant close to the other side of the cove.

Cala Tuent is a perfect place to swim in crystal clear waters and then relax and unwind on the shore. There are not a few who come here simply to enjoy the natural surroundings or to seek some tranquility and sit and read for a while between dips.

The waters of Cala Tuent are perfect for snorkeling

The rocky bottom, and especially the margins of the cove, where the cliffs plunge into the sea, constitute a magnificent underwater route. Cala Tuent is considered one of the best calas in Mallorca for snorkeling.

For divers, they are also magnificent waters, with good diving points

Like Morro des Forat, for different levels of experience.

An advantage of Cala Tuent is that from the parking area to the water there is not much distance to carry the equipment. If we do not have it, on the same access road to the cove there is a diving center where you can rent the equipment and organize trips.

Cala Tuent is also a good point from which to take kayak routes to visit other nearby coves in the Sierra de Tramuntana.

From here you can visit part of Sa Costera, a spectacular place in this part of the Mallorca coast. You can also ascend part of the Puig Major (the top is a military zone and its access is restricted, you must request permission) by several routes: one of about 11 km and another more than 19.

We can also go along the coast to Cala Roja. Or the most daring can cross the Sierra to its other side and reach Alaró.

Near Cala Tuent we should not miss a visit to the Torre de sa Mola de Tuent, a defense tower from the 16th century that was in service as an aerial surveillance tower until the 1950s. Easier is the path to the nearby Sa Calobra and the mouth of the Torrent de Pareis.

Cala Tuent is also a good place to practice climbing

Near it is the massif called Es Queixal, with several routes for different levels.

We have already commented that it is a popular destination for cyclists, although the climb is very hard

It is advisable to get up early to avoid, at least in part, the traffic of cars, buses and other cyclists that go down to Cala Tuent, or especially to Sa Calobra.

Surprisingly for such an isolated place, near Cala Tuent there is a restaurant, Es Vergeret

It is located near the left bank of the cove and during the descent to it we will have seen the detour. In Sa Calobra there are several more restaurants, although it is a more crowded area in summer.

The closest establishment is the Monastery of Lluc, where you can stay in the classic monks’ cells or more standard rooms, although simple. It also has restaurants and some shops.

The closest hotel zone is Sóller and Puerto de Sóller

Where in addition to vacation rentals there is a good offer of hotels of all categories. Here we will find mainly three and four-star hotels, but also luxurious five-star hotels and hostels for backpackers.