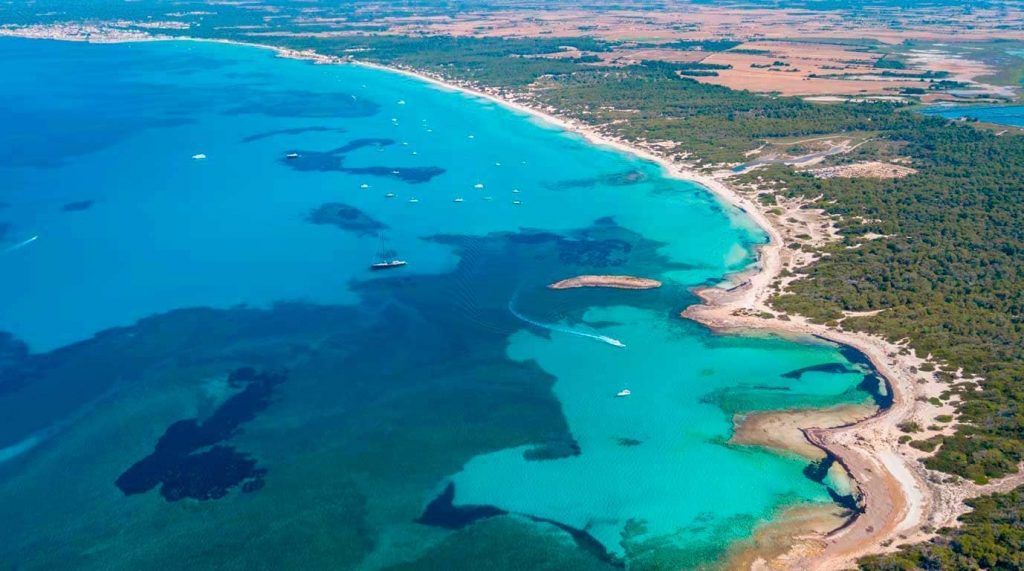 Es Trenc beach (in Spanish, La Brecha) is a large sandy area located in the municipality of Campos, in the south of Mallorca. It is 2.5 km long and about 25 m wide. Its sand is white and fine, with a gentle slope, and clear turquoise waters

According to local tradition, the gap between the beach dune system and the brackish that extends inland was caused by the tsunami produced after the Lisbon earthquake of 1755. Whether it is true or not, it is true that the Es Trenc dunes They offer protection to Salobrar de Campos, the second largest wetland area in Mallorca, after Albufera de Alcudia.

Returning to the beach, it is highly appreciated by all age groups

It is mainly visited by groups of young people, but it is also perfect for families due to the low slope of the sand and the tranquility of its waters. It is also frequented by the elderly, since it has accesses enabled for people with mobility problems.

As a virgin beach, it is common to practice nudism

Especially the areas closer to the margins, near Ses Covetes and Illa Gavina, have a greater presence of nudists, but in the rest of the beach it is perfectly accepted and the mix between nudists and people wearing swimsuits is normal.

It should be mentioned that in the peak months of the summer the occupation of the beach can be high, due to the popularity of the beach and the ease of access

Depending on the winds and currents, posidonia remains may appear in the waters and sand, but they are regularly removed. Despite its appearance, the presence of posidonia is an indicator of the great cleanliness of the waters in which it grows.

It is also a good place to anchor, as long as there are no strong winds. The bay in which Es Trenc is located is very exposed to winds between the northwest and the south. But these same winds make it a good place to practice windsurfing and kitesurfing. 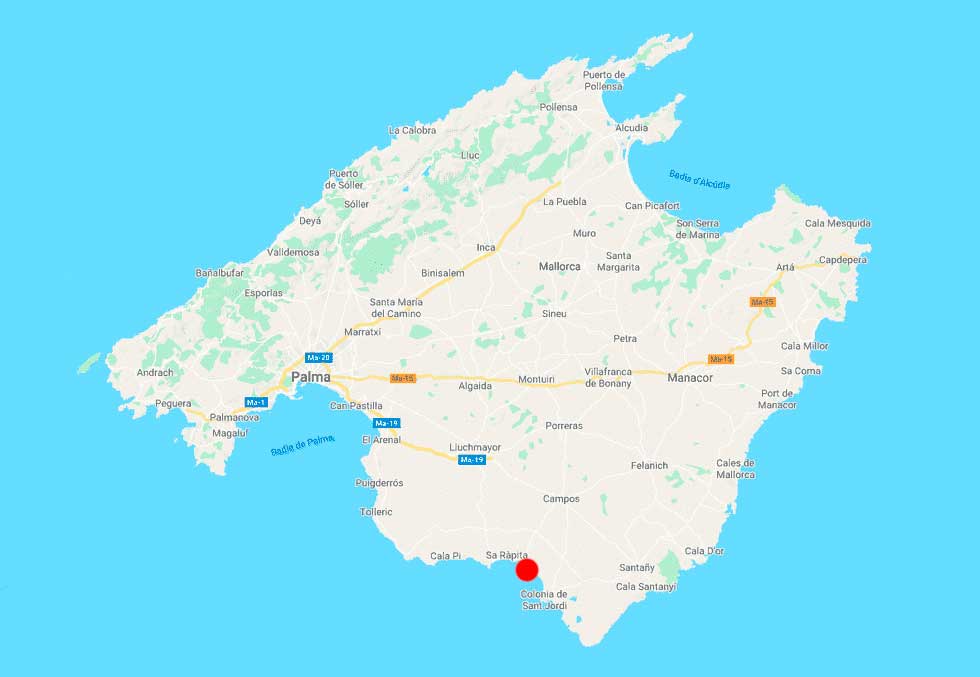 How to get to Es Trenc

From Palma the shortest way is to get to Llucmajor and take exit 26 towards s’Estanyol. At about 6 km we will find a detour to the left that already indicates the route to Es Trenc. Now we just have to follow the signs that will take us to the car park (for a fee) next to Ses Covetes, the small cove of rocks near Es Trenc.

From the center or north of Mallorca the best option is to go to Campos, continue in the direction of Sa Rápita, and from there follow the indications to Es Trenc again.

At the other end of the beach there is another car park (also paid). To get there, the route will be similar to the previous one, but instead of continuing in the direction of Sa Rápita, we will follow the directions for Ses Salines, but we will see that the path to Es Trenc is also indicated. This route has the attraction of skirting the salt flats that give the town of Ses Salines its name.

There is no free parking and it is completely forbidden to park on the roads or in the pine forests that may be accessible.

Line 530 has several stops next to the beach and one of the car parks, and departs from the center of Palma.

Es Trenc is also a good place to reach by bicycle, except for the final sections, the roads that run through the area are wide and have good shoulders.

As we have already said, if strong winds are not blowing it is a good place to anchor

On the buoy line the depth is 4 m on a sand and seaweed bottom. It is not advisable to approach the shore due to the presence of a 0.5 m slab that is difficult to see. The best place to anchor is at the southern end, near Illa Gavina.

Despite being a virgin beach, Es Trenc has many services for the comfort and safety of bathers

The old buildings were demolished to install wooden bars that are more respectful with the environment and that do not clash with the natural environment of the beach.

The clean and clear waters of Es Trenc are perfect for taking a good dip and then lying on the fine sand to sunbathe. The shallow depth near the shore allows families with children to also enjoy it with great tranquility.

The clarity and cleanliness of these waters also make them attractive for snorkelling and diving, albeit with caution

In summer many boats can congregate in the vicinity of Es Trenc and all safety measures must be taken to avoid accidents.

The length of Es Trenc invites you to take a good walk along the shore. On this walk we will come across machine gun nests built after the Civil War in anticipation of a possible landing during World War II, but they were never used. Several years ago they were painted white and decorated with verses by the poet Costa i Llobera.

The lands that surround the beach do not offer many possibilities for hiking, since they are either farmland, or they are areas of salinas

However, if you can travel the surrounding roads to observe the environment that constitutes a unique landscape in Mallorca. On the one hand, the salt flats, exploited for more than 2000 years. And on the other, go into the wetland to observe the birds.

Yes, we can visit the cala de Ses Covetes, at the northern end of Es Trenc, and Illa Gavina, to the south. This islet is just 30 m from the shore and can be reached on foot. It is a small island (115 m long and 30 wide) that includes an artificial cave from the Talayotic period that was used as a burial site. In historical, and even recent times, it was used as a hideout for smugglers.

For cyclists Es Trenc is practically a mandatory stop

Several routes depart from here, such as this stage to Cala d’Or, or they have a stopping point, such as this return to the municipalities of Campos and Ses Salines.

The most important is undoubtedly that of Ets Antigors, near the town, and one of the first to be scientifically excavated a century ago.

To regain strength, there is a restaurant and several beach bars on the beach.

The restaurant has its own parking and deducts part of the parking amount from the food bill, but in any case it is advisable to look first at the prices, which are high. However, they are a good alternative if we don’t want to carry our food to the beach.

There is no accommodation on the Es Trenc beach. Decades ago the construction of apartments was promoted in the area near Ses Covetes, but they were demolished several years ago to return the environment to its original state.

What there are in the vicinity are rustic farms for rent. There is also an agritourism nearby

In Sa Rápita and Campos there are several hotels of different categories. The closest major tourist center is Colonia de Sant Jordi, which does have a more varied offer. There we can find from one-star hostels to five-star luxury hotels. There are also apartment complexes and a good deal of vacation rentals.