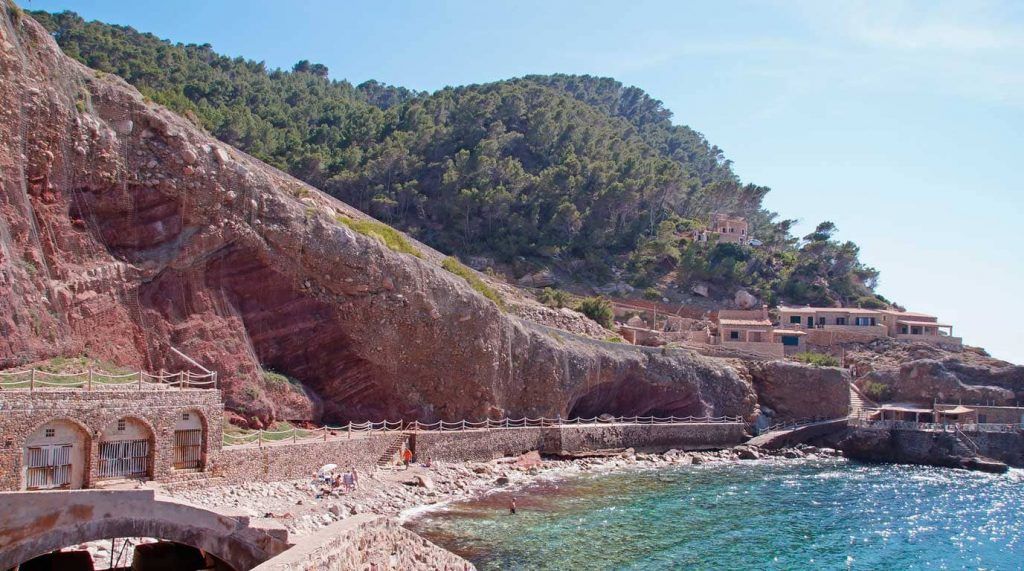 Cala Estellencs is a small rock and stone cove nestled between red clay cliffs under the town of the same name, in the Sierra de Tramuntana. The area for bathers is about 80 m long and about 15 wide, all made of stones and boulders from the surrounding cliff.

The stream of Son Fortuny flows into the cove, which, if it carries water, produces a small waterfall that can be used as a fresh water shower

As in all rocky coves, the use of rubber sandals is recommended, since boulders alternate with still pointed rocks. You can go with children, but taking precautions, as there is no lifeguard service.

Like all the coves of the Sierra de Tramuntana, Cala Estellencs surprises with its particular beauty

Around the cove we can see how the slope of the pine-covered mountain sinks into the sea, leaving the cove itself as a large notch crowned by the pines on the cliffs. 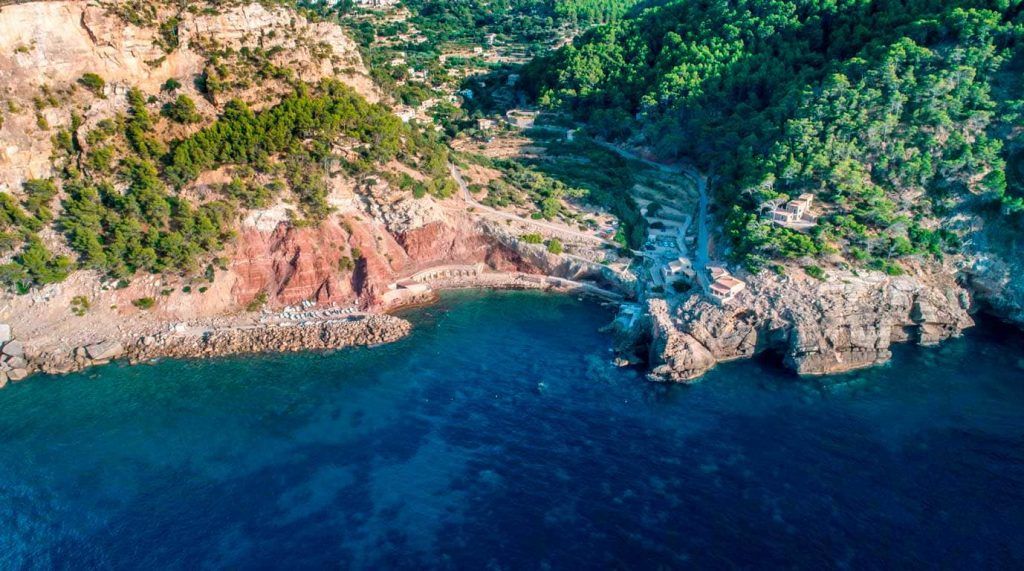 Originally the cove was used as a refuge for local fishermen

That is why there is a boathouse on its left side and practically half a cove is occupied by fishermen’s houses. The rest of the cove is crossed by an elevated walk used as a viewpoint.

Being a rock cove is not particularly comfortable, so it is not very busy. Only in the strongest summer months can there be a certain agglomeration in a timely manner.

Keep in mind that if the wind blows from the west or from the northwest, the cove is very exposed, so you must exercise caution when swimming in it

Nor is it a suitable cove for anchoring boats, considering these winds and rocks very close to the surface.

These places, together with the great cleaning of its waters, make this cove a very attractive place for diving, both free and scuba diving. 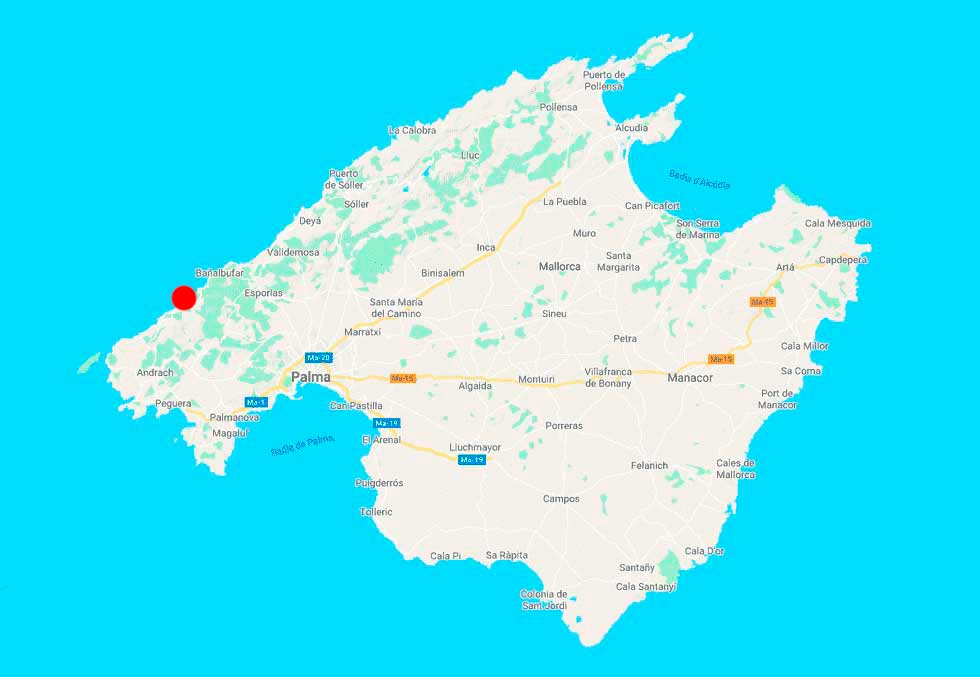 How to get to Cala Estellencs

Estellencs is only 17 km from Andratx. If we stay there, the only route is through the winding Ma-10 road, which runs through the entire Sierra de Tramuntana.

If we want to get to Estellencs from Palma

We have two options of similar duration (one hour): through Andratx or Banyalbufar.

Next to the cove there is a parking but very small, with capacity for 8 or 10 cars.

If we want to go to Estellencs by public transport

From Palma we have line 200, which leaves from the center of Palma. The stop leaves us just under 1.2 km from the cove.

Although Cala Estellencs cannot be said to be virgin, since there is a boathouse, fishermen’s huts and a promenade, but they are very integrated into the environment

Otherwise, there are no lifeguard services, toilets or showers (except for the waterfall that can form the Son Fortuny torrent).

At the right end of the cove, next to the small parking lot, there is a small bar called Sa Punteta, built on the same cliff

Where we can refresh ourselves, have a combined plate or savor simple dishes of Balearic cuisine such as pa amb oli or trampó. 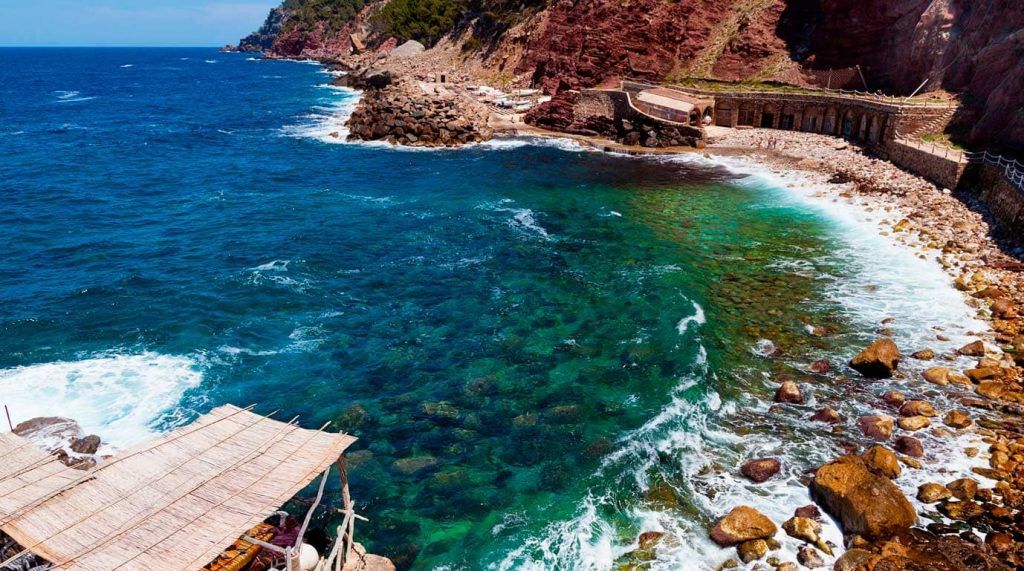 Although better if we bring some type of armchair, it is difficult to find a comfortable place to extend the towel. For the rest, there is no facility to rent sports equipment, if we want to carry out any activity we will have to bring it with us.

We have already commented that the cleanliness of its waters and the existence of several underwater caves make this cove a perfect place for scuba diving and snorkeling.

A tour of the Sierra de Tramuntana from Puerto de Andratx to Pollensa. Specifically it is the end of the first stage from La Trapa (not yet fully marked), and the beginning of the second stage, from Estellencs to Esporles, through Banyalbufar. 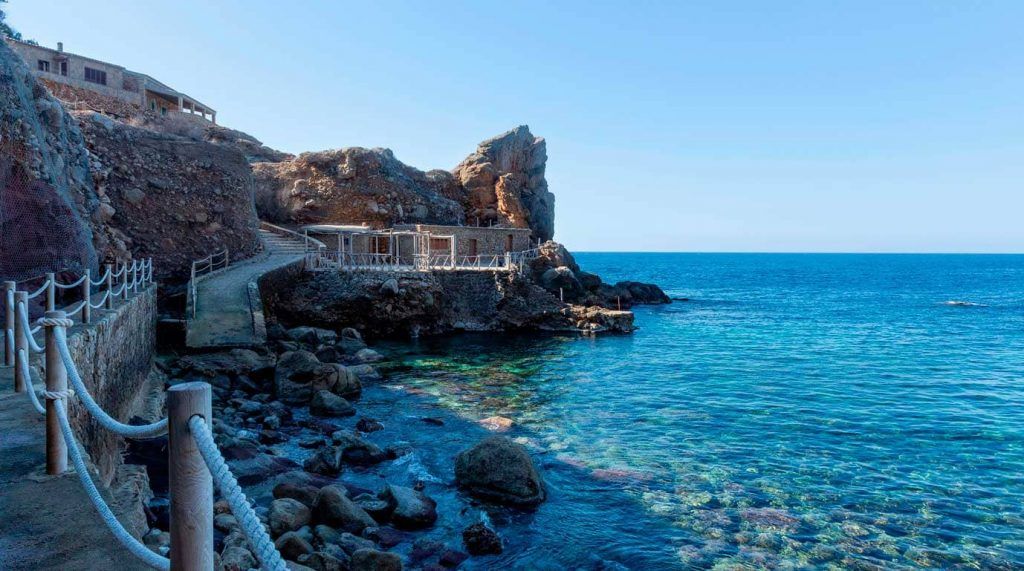 Estellencs is a small town, in fact it is the least populated in Mallorca with just 300 inhabitants, and its hotel offer is scarce. Even so, for those who seek tranquility in a unique place there are several three and four star hotels in the same town, and several rural farms nearby.

In the nearby Banyalbufar and, above all, Andratx, there is a greater and more varied offer.

Take a look at Cala Estellencs in 360º