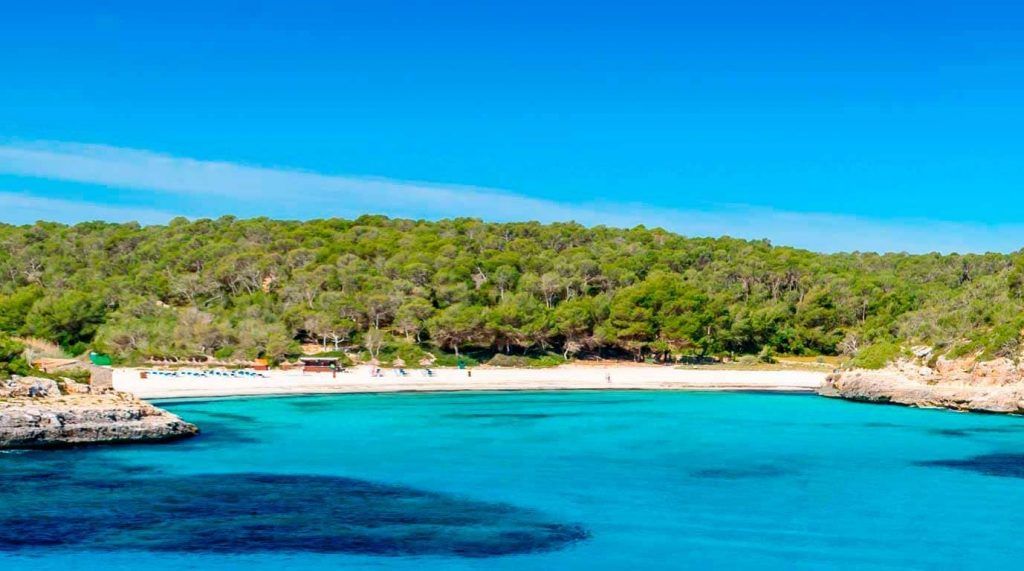 Cala s’Amarador; virgin beach in the heart of a natural park

Cala s’Amarador is one of the virgin beaches found in the Mondragó Natural Park, on the Santanyí coast, in the south of Mallorca

It is the largest cove in the natural park with 150 m in length and up to 45 m in width. It is a beach of fine white sand and waters of a luminous clear blue.

The water is shallow, you have to go a lot to cover it, so it is perfect to go with young children. However, it does not have access enabled for people with reduced mobility.

The beach is surrounded by a protected dune system (the paths to travel are marked) where pines, mastic, wild olive trees, etc. grow

At the back there is a wetland formed by the mouth of the torrent d’en Roig (or s’Amarador). Being included within the Mondragó Natural Park, it has avoided becoming an urban beach and preserves all its natural beauty.

But there is still enough space to avoid the crowds and enjoy some tranquility.

The cove is flanked by low rocky areas also covered with pine and scrubland, and it is highly protected from the wind, so its waters are usually very calm. It is a very good anchoring point.

How to get to cala s’Amarador

We will go first to Santanyí

From Palma we will take the Ma-19 motorway towards Santanyí. As soon as we get to Santanyí, we will find the directions to continue our route to Cala s’Amarador. At roundabouts where it is not indicated we will follow the indications to Cala Santanyí. At 1.4 km from Santanyí we will arrive at a roundabout where we will take the fourth exit, which is already the direct path to the Cala s’Amarador car park.

Parking is paid, the rate is € 5 per day for cars, € 2 for motorcycles. From here there is a walking path to the beach of about 400 m.

Cala s’Amarador is a good place to visit by bike

There are numerous routes that run through the nearby roads. The only delicate point is part of the final section of the access road, somewhat narrow in places and with stone walls on both sides, but it is a short section. Within the park you can cycle by bicycle, but always without leaving the marked paths.

In the summer months there is a bus line

The 507, which allows us to get to Cala Mondragó from Cala d’Or. From there there is a concrete path of about 500 m that runs along the coast to Cala s’Amarador.

As we have seen, Cala s’Amarador is a well sheltered beach, so it is a good place to anchor

As evidenced by the number of boats that usually congregate here. It is only exposed to winds from the east-southeast. The bathing area is marked to avoid accidents. The sandy bottom has a depth between 4 and 6 m.

Although it is in a natural park, s’Amarador beach has a good number of services to serve its visitors

It has lifeguards for greater tranquility of bathers. It also has rental of umbrellas and hammocks, and public bathrooms (although no showers).

It also has a small beach bar where drinks, seasonal fruit and simple meals such as pizzas and sandwiches are served. If we have brought our food, between the parking lot and the beach there is a picnic area in the shade where we can rest.

In s’Amarador we can enjoy clean and clear waters where we can cool off. The fine white sand will be a perfect mattress on which to lie down to sunbathe.

We shouldn’t forget our snorkeling gear

The great clarity of the waters, and in particular the light that illuminates them in the morning, allows us to enjoy a great underwater show. In the area closest to the cliffs that flank the beach we can contemplate a great variety of marine life.

Going deeper into the sea, Cala s’Amarador and the neighboring coves that make up all of Cala Mondragó are a good place for diving. We must bring the necessary equipment with us since there are no facilities to rent it.

But without a doubt, those who will most enjoy visiting Cala s’Amarador are nature lovers.

Within the natural park there are four self-guided routes. Two of them start at s’Amarador beach, while the other two start from neighboring Cala Mondragó. In this case, it is possible to arrange the visit for people with reduced mobility, who will be provided with a Joëlette chair, in addition to the help of volunteers that may be required.

If we want to explore the park on our own, there is no problem

Provided that forbidden areas (such as dune systems) are respected and the integrity of ethnological elements is respected. The first route will take us to Ses Font de n’Alís and La Guardia d’en Garrot. The second route will bring us closer to the other coves of the Mondragó Natural Park. Outside the park, the third excursion will take us to travel a good part of the Santanyí coastline, to Cala Santanyí. In the opposite direction we can reach the town of Porto Petro.

If we are somewhat curious about the prehistory of Mallorca

Near the natural park, about 9 km away, is the talayotic site of Ses talaies de Can Jordi. It is a set of talayots whose origin dates back to 1000 BC, but which continued in use until the Islamic period, about 2000 years after its construction.

But if we want to change of scene we have many options. The closest are Santanyí, Cala Figuera and Cala Santanyí on the one hand, and Porto Petro on the other. In any of these locations we will find a good gastronomic offer. A little further away we have Cala d’Or, where the gastronomic offer does cover all tastes and budgets.

In the natural park itself there is a small and simple hotel, next to Cala Mondragó. There are also rustic farms for vacation rental.

If we look in nearby towns, in Santanyí we have a four-star hotel, and in Cala Figuera there is a greater offer: hotels between one and three stars, and tourist apartment blocks, as well as some vacation rentals.

A few kilometers further south we have Cala Santanyí, which has an even greater offer of accommodation.