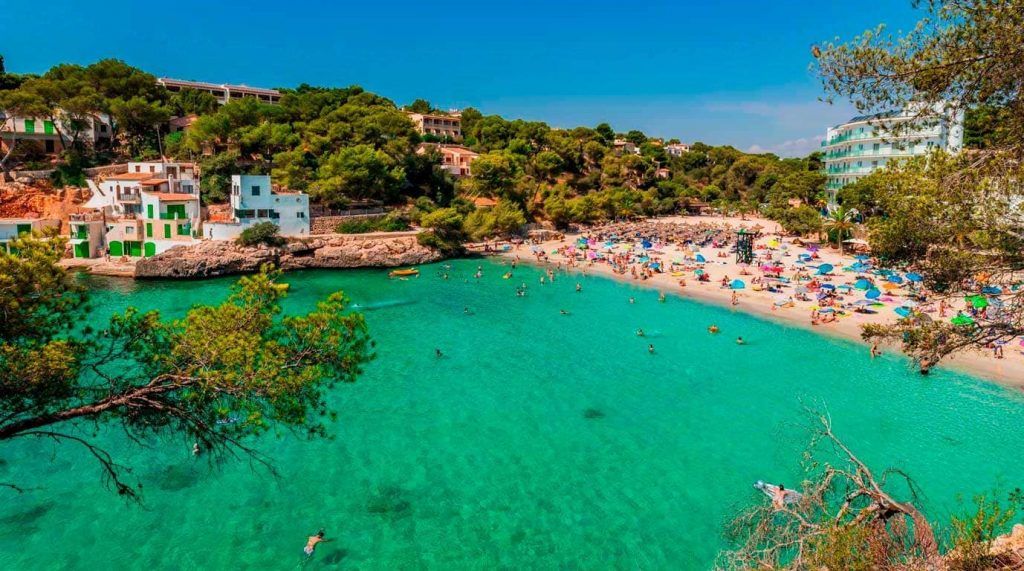 Cala Santanyí is a small sandy cove located in the south of Mallorca, in the municipality of Santanyí, around which the urbanization of the same name has grown. It is just over 5 km from the town of Santanyí, and about 55 from the capital, Palma. The beach is about 70 m long, and its width is variable: from 50 m at its narrowest point to about 100 m in the widest area.

The small depression that constitutes the beach forms the mouth of the Torrent d’en Romaguera. The cove opens to the south flanked by two small cliffs in a sea inlet of more than 200 m, which makes it highly advisable for anchoring boats. It is a good shelter particularly when north-northeast winds blow. In fact it has been used as a fishermen’s refuge for many years and there is a small slipway on its right bank.

Its waters are kept clean and calm, and it is a perfect place to spend the day with the family. It also has access for people with reduced mobility. The beach is of fine white sand, although on its sides, next to the cliffs, there are quite a few rocks. A few tens of meters between the sandy bottom some rocks emerge, generally quite rounded by the movement of water and sand.

The environment of Cala Santanyí is quite urbanized. Several hotels appear behind the pine-covered cliffs, but their presence does not ruin the experience of enjoying the beach. Of course, the presence of tourists from these nearby hotels and the ease of access to Cala Santanyí mean that in the summer months the beach becomes crowded. 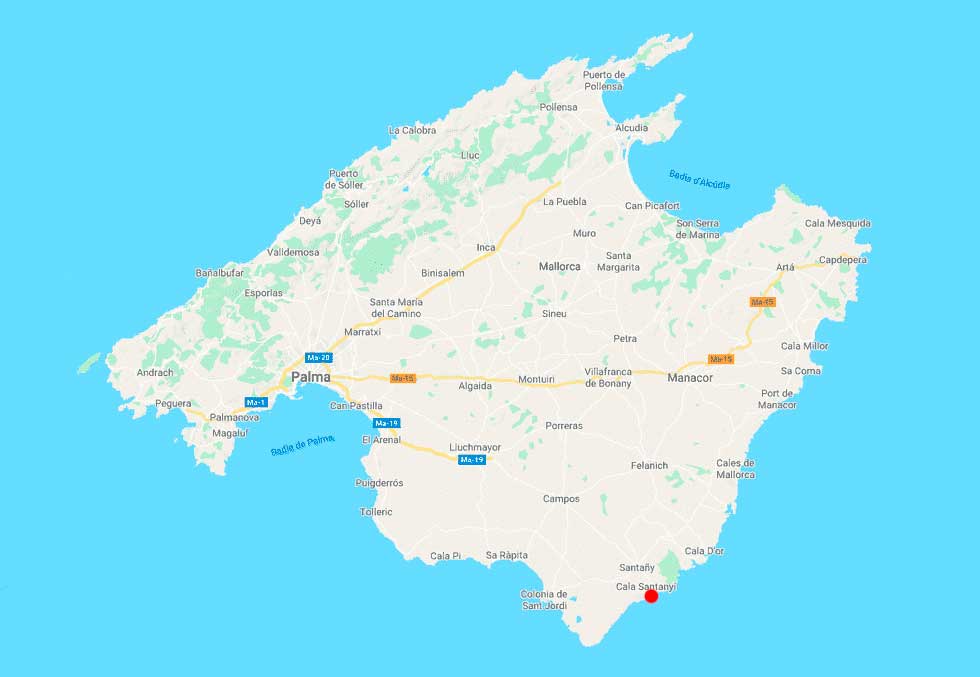 How to get to Santanyí

The route to reach Cala Santanyí is perfectly signposted. If we start from Palma we will take the Ma-19 highway following the Campos / Santanyí indications. After about 20 km we will leave Llucmayor on our left and we will come to a roundabout, where we will take the exit to stay on the same Ma-19. At 10 km we have Campos, a town that we will cross following the signs of Ma-19 / Santanyí along three roundabouts.

We will follow this road another 11 km, and we will already be in Santanyí. At the entrance roundabout to the town we will take the first exit, in the Ronda de Cas Canonge. At the next two roundabouts we will continue straight on to link up later on the Ronda des Deume. At the next roundabout we will go straight ahead to continue along the Ronda de sa Tanca. At 300 m we will turn right to exit Santanyí on the Ma-6102. At 1.4 km we will reach another roundabout (next to the cemetery) where we will take the second exit, signposted as Cala Santanyí / Playa. We can also take the third exit, towards Cala Figuera, and after 500 m we will come to a junction (properly signposted) where we will turn right to also reach Cala Santanyí.

Right next to the beach access there is a small parking lot, but if it is full (normal in summer) there is no problem finding parking on any of the streets of the complex.

If we are in the east of Mallorca, the most practical thing is to go to Manacor or Felanitx, and from there take the Ma-14 road to Santanyí, and from there follow the previous indications to get to Cala Santanyí.

We can also reach Cala Santanyí by public transport, there are two bus stops, one of which is next to the parking lot on the beach itself.

Cala Santanyí has ​​all the services to make our day at the beach more comfortable. There are showers and toilets, and there is also a lifeguard service. We can rent umbrellas and deck chairs if we don’t want to carry ours. There is also a beachfront restaurant, and several others nearby.

There are various sports activities available. You can rent surfboards, paddle boats and canoes, and one of the hotels has a small diving school with the possibility of renting the equipment.

Cala Santanyí is a perfect place to spend a beach day with the family. To the ease of access and the cleanliness and tranquility of its waters we can add the services that we can enjoy for our greater comfort.

As we have said we can rent a velomar, canoe or surfboard to explore its calm waters. Due to their cleanliness, they are also ideal for snorkelling. They are also perfect for diving, with a school in the same cove, with the possibility of renting the equipment.

Near the beach, on the cliff to the left, the entrance to the underwater cave of Es Riu is hidden under water. This cave of about 260 m in length was connected to the Cova des Drac, whose surface entrance is also close to the beach. The entire system included about 800m in galleries, but crumbling rocks sealed the connection and it is not possible to cover it entirely. This Cova des Drac has been explored and mapped, but it is not freely accessible.

But in addition to enjoying its waters we can also enjoy the surroundings of Cala Santanyí. For the more daring there are perfect walls where you can practice climbing. There are also areas where you can practice the psicobloc. And continuing to the southwest, we will find the spectacular rock formation called Es Pontàs, a stone arch in the middle of the sea. There is a signposted path from Cala Santanyí to reach the viewpoint, and it is not uncommon to find climbers trying to climb it through its inner house. A challenge.

If we are interested in nature tourism, a few kilometers away is Cala Mondragó, a cove that remains totally virgin. There is a hiking route from Cala Santanyí. Another route suitable for the whole family is the one that takes us to the nearby Cala Figuera. In the opposite direction we can reach Cala Llombards, another small sandy beach.

If we are fans of cycling or mountain biking, Cala Santanyí is also a point of origin or passage for several routes that run through the east and south of Mallorca.

If our interest is cultural tourism, the environment of Cala Santanyí also has several surprises in store for us. This area was populated since prehistoric times, and there are several caves from the pre-Talayotic era.

We can also visit a 17th century watchtower, the Nova de sa Roca Fesa Tower. Built in 1663 to protect this part of the coast from the incursions of corsairs, by the end of the 18th century it already needed major repairs. In 1825 the gun with which it was armed was removed, and by 1850 it needed major repairs again, being definitely abandoned not many years later. Fortunately it was restored in 2004, recovering its original appearance. It is located at the point that separates Cala Santanyí from Caló de ses Agulles. The tower is reached by following Sa Torre Nova street, to the left of the cove, and its base is magnificent on this part of the coast of Mallorca.

Finally, we have the possibility of taking a walk to Santanyí. They are just under 4 km, and we can visit its historic center, shop at craft stores and visit the flea market that is held two days a week (Wednesdays and Saturdays).

Cala Santanyí is a small tourist center, it has avoided the overcrowding of other enclaves in Mallorca, but still has a good offer of accommodation. We have from one star hostels to two and three hotels. There are also tourist rentals of apartments, chalets and villas for all tastes and budgets.

If we do not find accommodation in Cala Santanyí a few kilometers we have more options in Cala Figuera, and a little further, but not much, we have the town of Cala D’Or, an important tourist center in this area of ​​Mallorca.