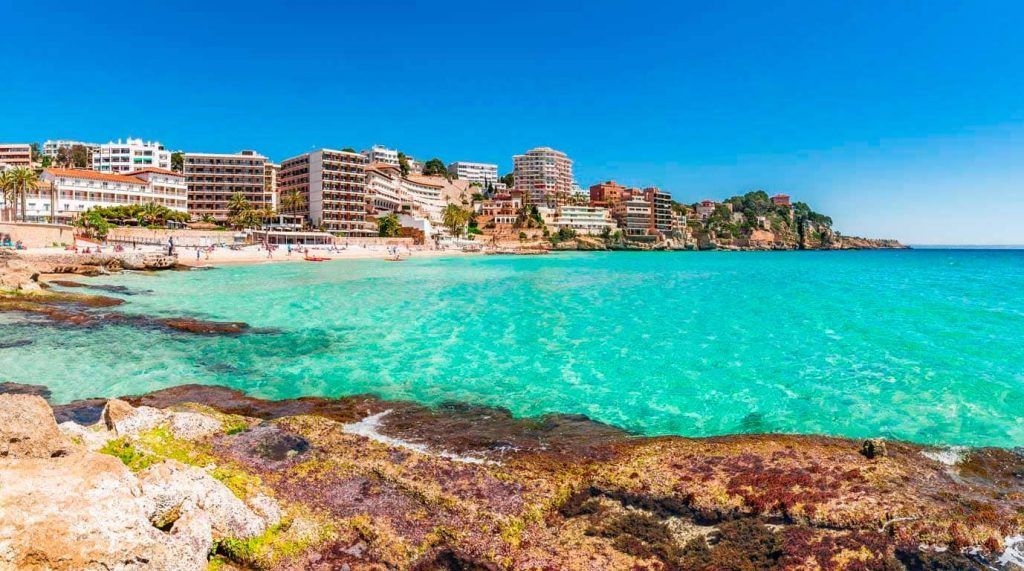 Cala Major; urban beach in the heart of the bay of Palma

The weather in Cala Major

Cala Major (Cala Mayor in Spanish) is located west of Palma and gives its name to the neighborhood that grew up around it. It is a sandy area of ​​250 m in length and up to 45 m at its widest point of golden sand. In the water some rocks can emerge under the sand. It is an urban beach totally surrounded by buildings.

In the 70s and early 80s it suffered strong urban pressure that led to a great deterioration of the beach. It was artificially regenerated in the late 1990s and has been in good condition ever since.

On its right bank it is protected by rocky areas while on its left bank the cliffs of Portopí begin to rise on which the Marivent palace is built, the summer residence of the Spanish royal family. Almost in the center of the beach there is a breakwater that serves as a solarium.

Cala Major beach juts very gently into the sea, which makes it very suitable for small children to enjoy in peace.

This, coupled with its proximity to the city, makes it a popular beach for older people as well. It also has access for people with reduced mobility.

But as the day progresses the breeze picks up and they are usually clean taking on a fantastic turquoise color. It also has the drawback of a very high occupancy by both tourists and residents. In return, these same buildings act as a parapet to protect the beach from strong winds, being exposed only to those to the south, directly from the sea.

Due to its geographical characteristics, Cala Major is very suitable for anchoring, but it is usually prohibited for security reasons as it is next to the Marivent palace

How to get to Cala Major

To get to Cala Major from Palma we can do it from the Vía de Cintura Ma-20. At the end of it we will follow the indications to Cala Major, which will leave us in the same avenue of Joan Miró

If we start from near the center, it may be convenient to follow the Paseo Marítimo in the direction of Portopí. When we have passed the shopping center we will be almost at the beginning of the Ma-1 motorway, but a lane starts on the right that will also take us to the beginning of Cala Major.

Just upon arrival in Cala Major along Miquel Codola street, we will find a parking area on our right. We will only have to continue 100 m on foot straight, towards Gavina street, to reach one of the accesses to the beach. If we park in the nearby streets we must bear in mind that we are in an ORA area, we must not forget to put the parking ticket (the mobiAPParc app is also available).

The accesses to Cala Major beach are on Joan Miró avenue

There are also two lines of urban buses that circulate along this avenue:

Both leave from the center of Palma and stop at Plaza de España.

If we want to get there by bicycle, the best option is from the Paseo Marítimo

Take the access road to the Ma-1C and we will only have about 2 km to get to the beach of Cala Major.

Thanks to the cliff of the Marivent palace, and for the great facade of hotels and apartment buildings that surround the beach. The sandy bottom is about 5 m deep. But for safety reasons the anchoring of boats in these waters is usually prohibited.

As an urban beach, and one of the first beaches for mass tourism in Mallorca, Cala Major beach has all the necessary services to offer safety and comfort to its visitors

It has hammock and umbrella rental service, and there are showers and public toilets. It also has a lifeguard service between the months of May and October. It also has delimited areas for water sports, with the possibility of renting equipment.

Next to the beach there is a good range of bars and restaurants, and in its surroundings there are countless entertainment venues of all kinds.

Cala Major is a beach designed for mass tourism. It has a good shallow water surface where you can go quietly without covering just to escape the summer heat. And then it has a nice sandy surface to lie on in the sun. And if we don’t like sand, we can lay the towel on the breakwater that splits the beach in two.

It is also a good beach for snorkeling, especially on its shores.

To its right are the cliffs of Porto Pi, vertical walls that plunge into the sea. On its right side is the islet of El Pujolar, linked to land by a narrow bridge, and that separates Cala Major from Cala Guix.

Scuba diving, on the other hand, may not be so interesting as there are better places nearby from which to dive in the bay of Palma, and on the beach there are no diving schools or facilities to rent equipment.

On the other hand, there is an establishment where you can rent kayaks and paddle surf, bodyboard and surf boards, and they also teach initiation classes

The swell in summer in Cala Major is perfect to start surfing, while in winter, with stronger winds, there are bigger waves that attract more advanced practitioners of this sport.

In the surroundings there are a good number of restaurants, bars and different entertainment venues. There are also shopping streets with shops for clothes, crafts, souvenirs, and supermarkets.

Founded in 1981 by this Catalan painter, sculptor and printmaker who lived a large part of his life in Mallorca, it exhibits works by Joan Miró and other authors. It is a surprising architectural complex that houses an art school, exhibition halls, a sculpture garden and an auditorium. It is certainly a must for lovers of contemporary art.

Also about 500 m away is the Marivent Palace

Whose gardens are open to visits, normally between September and May, and when the royal family is not staying at the palace. Admission is free.

A little further, about 2Km, in the Dique del Oeste, is the Castillo Museo San Carlos

This early 17th century fortress built to defend the port of Palma was restored as a museum in 1981, opening 10 years later. It exhibits a large collection of weapons from all eras and around the world, as well as uniforms and collections dedicated to outstanding Spanish military personnel.

One of the oldest in the world still in operation and which houses an exhibition on the history of lighthouses and their operating systems.

Next to the Cala Major beach itself we can find three four-star hotels, plus the mythical Nixe Palace, a five-star hotel inaugurated in 1957 and which takes its name from the sailboat owned by Archduke Luis Salvador.

In the rest of Cala Major there are more hotels of two, three and four stars, as well as a wide range of holiday rentals

If we did not find anything to our liking here, very close to the Paseo Marítimo de Palma, with a wide range of three and four-star hotels.Also on Joan Miró Avenue and its surroundings there is a wide range of establishments: from hostels and youth hostels to hotels of three stars.